Totalitarianism and the Urizenic Mind

Milton wrote Paradise Lost just before the rise of the nation states, and Milton also had the intuition that there was something wrong with rationality, and he identified rationality with the mythology of Satan.

In the mythology of Satan, Satan was represented as the highest angel in God’s heavenly kingdom – so you can think about that as the highest psychological function, who had rebelled against God and then was cast into Hell.

His hypothesis was this: Evil was the force that believes that its knowledge of the world is complete. And that it can do without the transcendent. And as soon as it makes that claim, it instantly exists in a place that’s indistinguishable from hell.  [“In Hell all is Self Righteousness” – Blake. As McGilchrist notes in his fascinating gloss on Blake, “He who sees the Infinite (looks outward to the ever-becoming with the right hemisphere) in all things sees God. He who sees the Ratio only [looks at the self-defined world brought into being by the left hemisphere] sees himself only (the left hemisphere is self-reflexive)”]. And it could get out merely by admitting its Error, and it will never do that.

Milton and the Rejection of the Transcendent 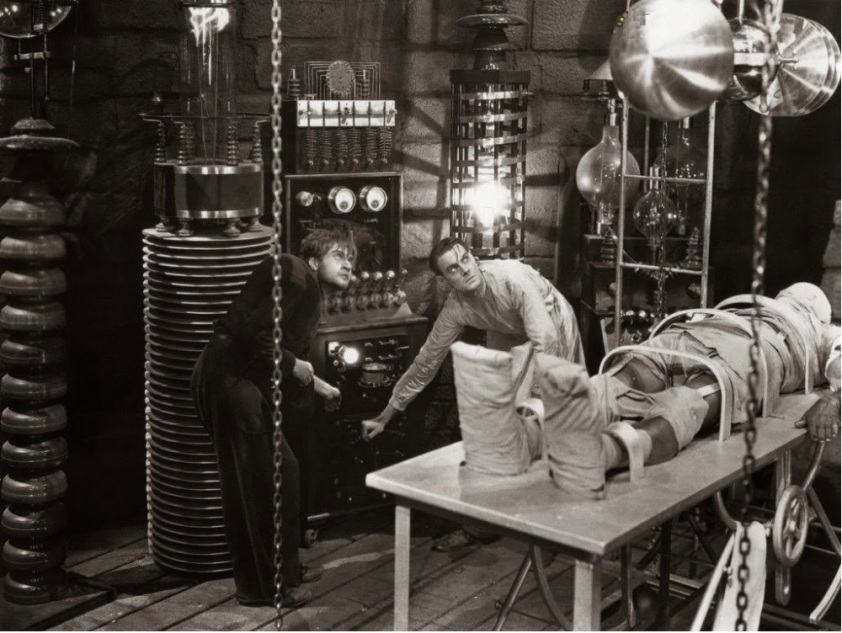 Archetype of the ‘mad’ or over-dominant scientist: Dr Victor Frankenstein. Mary Shelley’s novel is significantly subtitled ‘The Modern Prometheus’, and echoes both the Biblical and Miltonic stories in its framework. Like Milton’s aspiring angel, the scientist Victor Frankenstein wants to create and control life itself, but without the need for any transcendent function or any understanding of the deeper agencies at work: “A new species would bless me as its creator and source”, he vaingloriously declares before realising he’s created not a new Adam – his conscious design – but a destructive Demon – the rationalising form of his unconscious.

In Milton’s Paradise Lost, Satan is an intellectual figure. You see that motif emerge very frequently in popular culture. In The Lion King, for example, Scar is a Satanic figure, and also a hyper-intellectual. That’s very common. It’s the evil scientist motif, or the evil advisor to the king: the same motif. It encapsulates something about rationality.

‘Satan Arousing the Rebel Angels’ from Blake’s Illustrations to Milton’s Paradise Lost (1808). As Blake notes in The Marriage of Heaven and Hell, the story of this event has been adopted by both parties, by both sides of the brain: it is up to us to choose which version we accept, and therefore which program or hemisphere we choose to identify with, and therefore to define reality. In one account, Milton’s ‘God’ is the dominant, ‘winning’ side, fallen Rationality (“The history of this is written in Paradise Lost, and the Governor or Reason is call’d Messiah”), which thinks it has cast out or suppressed the bodily, “subconscious” forces threatening it. In its mirror version, Urizenic Rationality itself is the program that has been expelled from Eternity, through challenging the role of the “transcendent function”, as Peterson suggests, and decides instead to create a world in its own fallen image: the world of Representation and Division, over which it can have power.

What it seems to encapsulate is the idea that rationality, like Satan, is the highest angel in God’s heavenly kingdom. It’s a psychological idea, that the most powerful sub-element of the human psyche is the human intellect. It’s this thing that shines out above all within the domain of humanity and, maybe, across the domain of life itself. There’s something absolutely remarkable about it, but it has a flaw. The flaw is that it tends to fall in love with its own productions, and to assume that they’re total. Solzhenitsyn, when he was writing The Gulag Archipelago, had a warning about that, with regards to totalitarian ideology. He said that the price of selling your God-given soul to the entrapments of human dogma was slavery and death, essentially.

In Milton’s Paradise Lost, Satan decides that he can do without the transcendent—he can do without God. That’s why he foments rebellion. The immediate consequence, from Milton’s perspective, was that as soon as Satan decided that what he knew was sufficient, and that he could do without the transcendent—which you might think about as the domain outside of what you know—immediately, he was in hell. I was studying totalitarianism when I read Paradise Lost. I thought the true poet, like a prophet, is someone who has intimations of the future. Maybe that’s because the poetic mind—the philosophic or poetic mind—is a pattern detector.

Milton’s Satan and the Left Hemisphere

Milton did the first psychoanalytic study of malevolence and evil. God’s highest Angel, who was Satan, Lucifer, the Bringer of Light, the Spirit of Rationality, tormented a rebellion against God in Heaven and was cast into Hell as a consequence. Satan, as the highest Angel in God’s heavenly Kingdom, is a personification of the tendency of the Rational Mind to produce totalitarian systems and then to fall in love with them [“One King, one God, one Law” – Blake, The First Book of Urizen].

Jordan B. Peterson is a Canadian clinical psychologist and professor of psychology at the University of Toronto. He has a particular interest in the works of Carl Jung, and in understanding totalitarianism, and totalitarian ways of thinking. To watch his interview with Iain McGilchrist on the nature of the brain hemispheres, please click here.

Mythology is the externalised form of our psychological development. Lucifer, or the Unfallen Logos program within the Brain, was understood as the “highest psychological function” which had, however, dramatically shifted and now wanted to be Master rather than merely the brilliant Emissary. The record of this shift and fall into psychic Division is recorded in the Bible, the Norse sagas, the Greek pantheon, and Milton’s Paradise Lost, as well as being splashed beautifully across the ceiling of the Sistine Chapel. See The God of the Left Hemisphere: Blake, Bolte Taylor and the Myth of Creation by Rod Tweedy (Routledge, 2013).