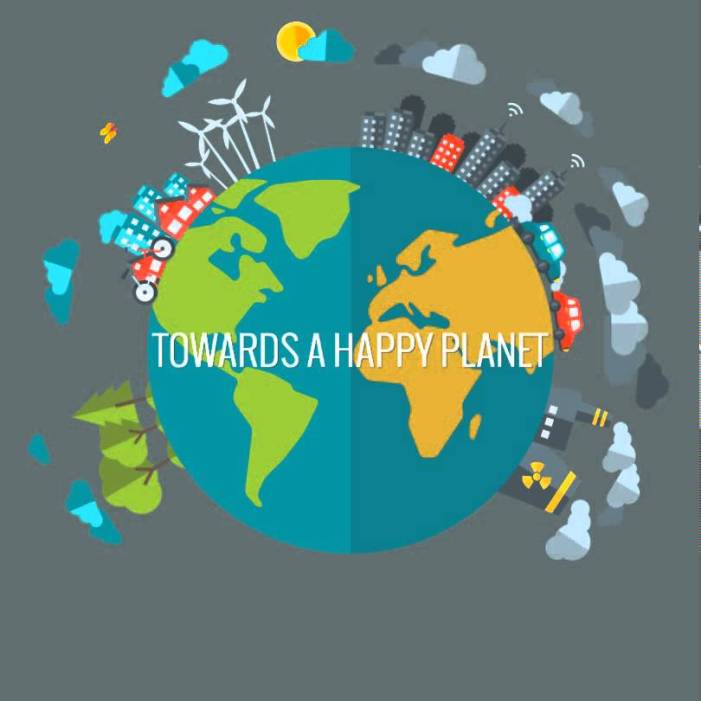 On 1st December 1948, President José Figueres Ferrer of Costa Rica abolished the military of Costa Rica after victory in the civil war in that year. In a ceremony in the Cuartel Bellavista, Figueres broke a wall with a mallet symbolizing an end to Costa Rica’s military spirit. In 1949, the abolition of the military was introduced in Article 12 of the Costa Rican Constitution. The budget previously dedicated to the military is now dedicated to security, education and culture.

With a stroke of a hammer over a section of a former military facility, former President José “Don Pepe” Figueres Ferrer proclaimed the abolition of the army and announced that the building would be converted into a cultural centre

Figueres also expanded the welfare state, extended the right to vote to women and Afro-Caribbeans, and nationalized banks and electricity. He served as President on three occasions: 1948–1949, 1953–1958, and 1970–1974, and lived until 1990 — the victorious general who did what Eisenhower never dared: abolished the military industrial complex.

The museum Museo Nacional de Costa Rica was placed in the Cuartel Bellavista as a symbol of the country’s commitment to culture, rather than war. In 1986, President Oscar Arias Sánchez declared December 1 as the Día de la Abolición del Ejército (Military abolition day). Unlike its neighbours, Costa Rica has not endured a civil war since 1948. It maintains small forces capable of law enforcement and foreign peacekeeping, but has no permanent standing army.

After his speech, Figueres took a sledgehammer and bashed a hole in a huge stone wall at the nation’s military headquarters, Cuartel Bellavista. Its imposing towers and massive gates had loomed over the capital city of San Jose since 1917, the country’s premier symbol of military power

During his visit to Costa Rica in July 2014, U.N. Secretary-General Ban Ki-moon stated that “for decades, Costa Rica has been a worldwide example in rejecting unnecessary military expenditures. Instead, the country bravely invested in health and universal education. The result has been less inequality and greater social peace.” The country has a literacy rate of 97.8 per cent, placing it in the top 40 countries worldwide.

Cuartel Bellavista is now a remarkable centre of art and culture, celebrating the country’s positive and creative history

The decision made on December 1st 1948 and enshrined in the 1949 Constitution, has forged generations of Costa Ricans who have never seen a war tank or a war plane on their territory. As Manuel A. González Sanz, the Minister of Foreign Affairs of Costa Rica, observes: “Costa Ricans will always aspire to carry schoolbooks rather than a rifle”:

The abolition of the army in Costa Rica is part of a deep culture rooted in the best traditions of a peaceful and unarmed country, which dates back to 1877, when it abolished the death penalty and continued to push for new developments to ensure the peaceful coexistence among nations. 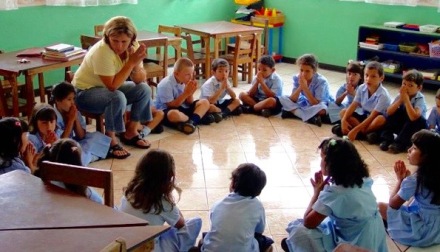 As a result of abolishing its military, Costa Rica invests more in education and health as a proportion of GDP than the UK

Through the unilateral renunciation of the use of force as a means of settling disputes, Costa Rica has privileged international law to safeguard its national interests, sovereignty and the rule of law. This was recently reaffirmed by the President of Costa Rica, Luis Guillermo Solís, during the last General Assembly of the United Nations, when he stated that, “Costa Rica firmly believes and practices all aspects of international law … this is the only way we know. Our only weapon has been and will always be international law.”

The usual greeting in Costa Rica is not “hola” but “pura vida”, which means “enjoy life” or “this is life!”

With the money it saves from demilitarising its society, Costa Rica has provided free, high-quality education, including free college, as well as free healthcare, and social security. Costa Rica has developed a culture of peace, including an educational system that teaches children nonviolent conflict resolution. In 1985, for example, Oscar Arias was elected president on a peace platform, defeating a candidate campaigning on a platform of militarization. He later received the Nobel Peace Prize for his efforts to end the Central American crisis.

Without an army, what is the basis of Costa Rica security?

“I think there are two answers to that”, writes WorldBeyondWar: “First, Costa Rica is not occupying nations all over the globe, blowing up families with drones, torturing people in secret prisons, arming dictatorships, defending Israel’s acts of genocide, etc. — that is to say, Costa Rica is not creating enemies.

Secondly, if the United States, for example, were to attack Costa Rica, no military might on the Costa Rican side could possibly prevail. The best defense against such an attack is, in fact, to possess no military that might be blamed for some incident as grounds for war.”

While earning his law degree from the University of Costa Rica, Luis Roberto Zamora Bolanos successfully litigated in the nation’s Constitutional Chamber of the Supreme Court over the then-president’s support of the invasion of Iraq. The government under President Pacheco had to withdraw its name from the list of countries the US coalition advertised that supported the war in Iraq, because this “support” contradicted the Constitution of Costa Rica

In the 1980s, the US government under President Reagan tried to force Costa Rica into military conflict,  but Costa Rica proclaimed neutrality. What withstood Reagan’s pressure was not an individual or a political party, but Costa Rica’s resilient culture and history of peace. A new threat came in 2003, when Costa Rica joined the ‘Coalition of the Willing’ to attack Iraq. Costa Rica provided only its name, rather than any actual participation, but a law student named Luis Roberto Zamora Bolanos successfully sued his own government in Costa Rican courts and forced Costa Rica out of the coalition.

Another instance of how its alternative approach to issues of security and global peace occurred in 2010, when Nicaragua took over a Costa Rican island. Had Costa Rica possessed a military, a war would likely have begun. As WorldBeyondWar reported the incident, “While Costa Rica did send its police to the area, not one bullet was fired. Rather the dispute was resolved in international courts, as all such disputes should be.”  Interestingly, when President Arias obtained a UN vote on a treaty to ban arms sales to any nation spending more on weapons than on its people, the only No vote was from the US. 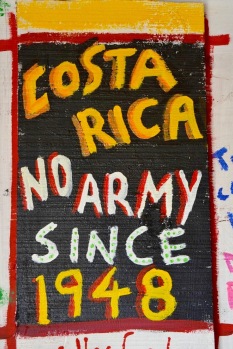 Costa Rica is known for its progressive environmental policies, being the only country to meet all five UNDP criteria established to measure environmental sustainability. It was ranked 42nd in the world, and third in the Americas, in the 2016 Environmental Performance Index, was twice ranked the best performing country in the New Economics Foundation‘s (NEF) Happy Planet Index, which measures human well-being and environmental impact, and was identified by the NEF as the greenest country in the world in 2009. As of 2014, 99% of its electrical energy was derived from renewable energy, and Costa Rica officially plans to become a carbon-neutral country by 2021.

Costa Ricans are better educated than Americans, live longer, are reported as happier – in fact, the happiest in the world in various studies – and also lead the world in the use of renewable energy. Life expectancy in Costa Rica is an impressive 79 years, higher than all of its Central American neighbours. 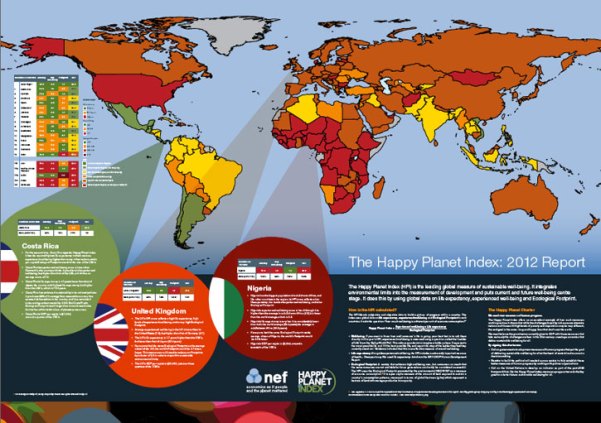 Costa Rica’s dedication to peace and the democratic process led to the United Nation’s University for Peace opening its headquarters in Ciudad Colón, a small idyllic town on the outskirts of San Jose. Students from all across the world now gather here to obtain their master’s degree in a variety of programmes related to peace and peacebuilding. 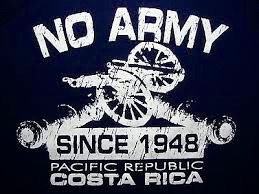 “The army is a thing of the past. War is not normal in human life. Peace is normal.” – José Figueres, former President of Costa Rica

According to the most recent Happy Planet Index, Costa Rica is the most satisfying place in which to live. As it notes, Costa Rica “has again topped the Happy Planet Index rankings with a substantial lead – having previously come top in our 2009 and 2012 editions.” In trying to explain its sustained success it observed that “Costa Rica abolished its army in 1949, and has since reallocated army funds to be spent on education, health and pensions. In 2012, Costa Rica invested more in education and health as a proportion of Gross Domestic Product than the UK.”  It has an HPI score of 44.7; Britain, on the other hand, languishes in 34th place.

If any country today can be called “green and pleasant” it is surely Costa Rica, whereas the effects of three hundred years of unchecked industrialisation, militarisation, corporate capitalism, slavery, and imperialism has left Britain a highly toxic, socially divided, aggressive and deeply insecure island. It is perhaps time it followed Costa Rica’s progressive example and abolished its military, and learned to cultivate a culture of peace, health care, environmental sustainability, and wellbeing.

To find out more about the Happy Planet Index and its innovative attempt to redefine progress and welfare, please click here.