The Nature of Perception and the Limitations of Your Reason

Is reason the root of all evil? That’s the core theme romantic era poet and artist, William Blake, tackles in his alternative-to-Genesis creation story, The Book of Urizen. 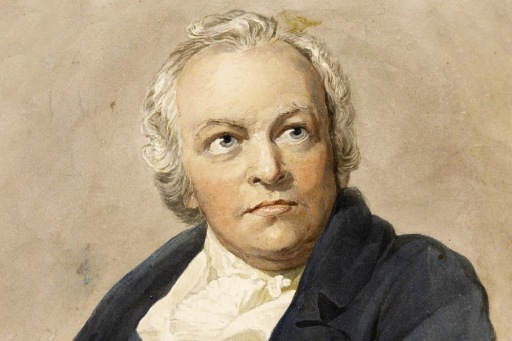 “a spiritual vision whose intensity is at the least a mystic’s, if not a prophet’s”

William Blake is justifiably considered to be among the greatest of England’s poets and artists. His place in the books of art history is assured despite his general disengagement from any definable movement, except perhaps romanticism, to which he belonged in spirit more than in form. Blake was professionally an engraver and acquired little acclaim for his work in his lifetime. To a degree this was due to Blake’s strange beliefs and obsessions – he at times claimed to see the dead, communicate with Biblical prophets and experience ecstatic visions. The Book of Urizen, Blake’s masterpiece – an epic poem originally created in seven copies using copperplate engravings, is of particular interest since it displays a unique artistic style, complex poetic form and most interestingly a spiritual vision whose intensity is at the least a mystic’s, if not a prophet’s. 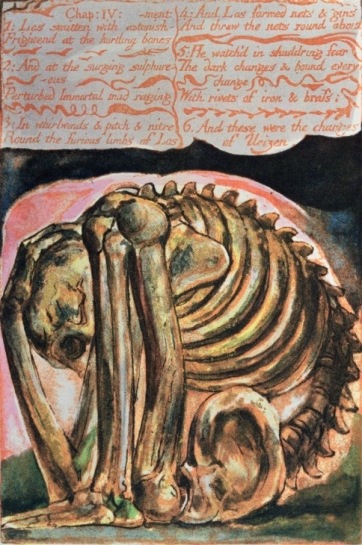 “The Book of Urizen is a creation story, an alternative Genesis”: the formation not of the external “heavens and earth” but of the psychological structures which generate our perception of them

The Book of Urizen is a creation story, an alternative Genesis – the connections to the Bible are many and it is not difficult to recognize the source for the protagonist, Urizen, a bearded patriarch, the most stable Western representation of Yahweh. But if Yahweh is at times a god of wrath, Urizen is a demiurge – a misguided creator whose purpose is flawed and whose world is broken – The Book of Urizen is a meditation on Evil as a seed in the very foundations of the universe.

What makes Blake relevant is that his evil is neither grounded in Christian puritanism nor romantic rebellion – Blake’s evil is the evil of reason and logic (“Urizen” is taken by some critics as a word play on “your reason”). The equation of Reason and Evil is precisely what makes Blake a significant poet for the post-Enlightenment West where reason was supposed to, is supposed to save humanity from its destructive passions and desires.

Blake’s case is very elegant. The poem opens with Urizen in the chaos that precedes Creation amongst the other Eternals. In the opening lines the Eternals note Urizen’s disappearance into a self-imposed void of solitude.

“In the opening lines the Eternals note Urizen’s disappearance into a self-imposed void of solitude”: the creation of the left hemispheric “space” of distance from reality, and the emergence of the world of measurement, logic, and representation instead: a self-enclosed, virtual, map of the world in terms of Urizen’s own operating system. As Blake notes, this effectively creates a sense of “Void” within the Urizenic space and a sense of “absence” in the world it seeks to communicate with and control: the dream of the Lacanian “Real” behind apparent “appearances”.

Urizen emerges with his creation, a book – the Law: “one command, one joy, one desire/One curse, one weight, one measure/One King, one God, one Law”.

“Urizen’s creation, a book”. Books are artificial ways of organising reality into abstract codes. The world it seeks to impose this order on it sees as a “chaos”, a significant word that appears in both Plato, The Book of Genesis, and modern physics. Look at the actual page of the book: Blake beautifully captures the contradiction inherent in this approach: the anarchy contained within all monarchies. Which is Urizen’s tragedy.

The Eternals refuse Urizen’s Law, casting him down like Milton’s Satan, and alone, broken Urizen begins to shape his (our) universe. To keep watch on him the Eternals send a spirit, Los, who binds fallen Urizen in chains, but in the process becomes bound to him. 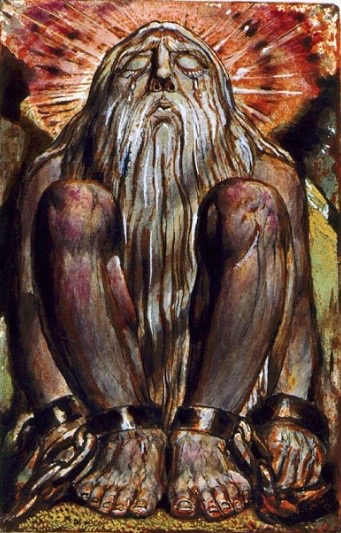 The poem details the creation of the universe as a fetal process – the universe is made in the course of Urizen becoming flesh – chaining his infinite potential to finite matter. In the conclusion Urizen awakens and explores the world he has crafted.

“the universe is made in the course of Urizen becoming flesh”. The creation of the human nervous system is therefore the creation of the form in which the universe appears to us. “‘God’ did not create the external universe: man’s sleep did, and we are still dreaming it. In Blake’s cognitive framework, man does not yet realise that his own programs and body are generating this universe, or being generated by the same source as it sees outside itself. He doesn’t realise or has forgotten the inner source of these forms. This inner world is composed of the immense organising energies and invisible (‘spiritual’) forces operating within man, notably, in Blake’s work, the ‘Zoas’. The ‘Creation’ is thus the creation or extended emanation of the human body, the spiritual conflicts which generate the illusorily stable fiction of a physical form and, in the same process, the illusion of a world external to the sensory programs that are producing it. As Frye remarks of this esse est percipi dimension to Blake’s thought, ‘when the present body of man was achieved, the universe necessarily appeared to that body in its present shape. Its present shape is a stabilizing of the object-world, made permanent on a basis of “mathematic form” or mechanical order. Therefore the creation of the present body of man must have been part of this stabilization’.” (Tweedy)

Seeing that none of his creatures can obey his law Urizen casts a net over humanity binding us as well, closing our eyes to infinity and locking us in Law: the laws of science and religion. Note that this presentation of creation is at odds with both science and religion – the rationalist’s claim that scientific law is sufficient for explaining the universe, is problematized every bit as much as a believer’s insistence on the law of his particular holy book – Blake’s work seeks to find a fundamental evil in Law itself.

“Urizen casts a net over humanity binding us as well, closing our eyes to infinity and locking us in Law: the laws of science and religion”

The Eternals refuse Urizen because he seeks to redefine himself as one opposed to their multitude – to create a Manichean division, but their refusal reinforces Urizen’s Manicheanism – by not submitting to his tyranny they define themselves as a multitude opposed to him, the Eternals become tyrants, Urizens themselves.

Long Division: Morality, Equations, Geometry, Law: all are produced by Urizen’s essential operating system – a world forever now divided into subject and object, male and female, up and down, good and bad, inner and outer, human and divine. All of these delusory divisions need to be overcome if man is to re-enter the state of integration and pre-reflectve betweenness that the prophets call “Eden”.

By binding Urizen in chains Los too becomes bound and loses access to eternity. These two events are definitive because the human multitudes at the conclusion do not really have a choice, they are at the mercy of the actions of the Eternals – Urizen and the others alike. Blake’s universe is ruined the moment his demiurge forces a single choice instead of a multitude of possibility – Urizen’s either/or is the end of freedom. Blake is suggesting that the human condition is one where every choice is an either/or choice – science or faith, good or evil, life or death, but also that this is an illusory condition – the universe is infinite in possibility and variety, that we are entirely blind to “the shrunken eyes, clouded over/Discern’d not the woven hipocricy/ But the streaky slime in their heavens/Brought together by narrowing perceptions/Appear’d transparent air…Six days they shrunk up from existence/And on the seventh day they rested./And they bless’d the seventh day, in sick hope/And forgot their eternal life”.

Blake’s work is thus an unprecedented and confounding critique of the very cornerstones of Judeo-Christian civilization: the Word and the Law. Evil is traditionally represented as a turning away from the one or the other – from Satan’s non servatim to the eating of the “forbidden fruit”, but here the Word and the Law are literally presented as manacles closing away the boundless possibility of the universe to the dull prison of the senses and the holy books.

A “God” that separates “Good” from “Evil” is actually a paranoid-schizoid God. Note his cloven hooves.

Science and religion cease to be opposing forces in Blake’s understanding, instead becoming obstacles to true knowledge – one by binding sight in the laws of the material universe, the other by binding thought in the words of the holy books. In this sense, the only possible “Good” as far as Blake is concerned, is the rebellion of sight – growing to see multiple possibilities through ecstatic vision.

For Blake this probably meant mystical and artistic gnosis, but intellectually it can be applied to all kinds of pluralist, multilateral thinking, if not to literal “mind-expansion” (Blake’s popularity had quite an upswing in the 60’s). As such William Blake is a unique voice that is very relevant in the Faith vs. Science debate, as well as any discourse on Evil, precisely because his comprehension and definition of Evil circumvents and redefines the discourse of morality as a futile game of either/or which cannot and will not be resolved without a vision that transcends sight itself.

“The only possible ‘Good’ as far as Blake is concerned, is the rebellion of sight”. Image showing the restoration of the human body, and therefore of the whole universe, to the state of vision.

This is an edited version of ‘Evil and Urizen: William Blake’s Visions of a Demiurge’ by Dr. Daniil Leiderman, Instructional Assistant Professor, Department of Architecture, Texas A&M University. To read the full article please click here.