Seeing the Bible through Blake’s Eyes 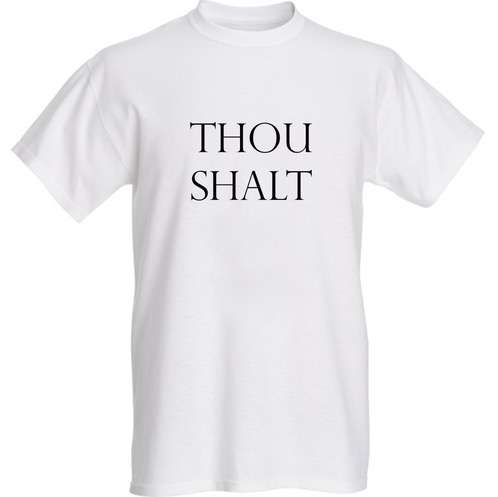 A decade ago I was invited by one of my graduate students to share in a complete reading of William Blake’s Jerusalem. A group of 12 of us attended the event, among them Philip Pullman, a Blake admirer. Each member of the group was asked to share in turn their experience of Blake and his work.

I found myself blurting out the words, ‘Blake has taught me to read the Bible.’ I had never articulated it like that before, but since then I have often recollected that off-the-cuff comment. I had never thought in that way before. I have reflected on the truth of that statement and come to see that Blake (as in much else in my intellectual endeavour) has been an important catalyst for my thoughts and understanding (Rowland, Blake and the Bible).

In trying to articulate what it is that Blake has taught me, I have started with this because the words ‘Blake taught me’ suggest a direct impact rather than a detached engagement with someone’s words. There’s always a sense when engaging with any of Blake’s works that more is going on than a mere encounter with words or images. It is what is constitutive of what is ‘more’ that is one of the most important aspects of Blake’s works, indeed, is the way he relates to pedagogy.

How Blake teaches us to read the Bible: Blake’s take on the Biblical stories of the Elohim Creating Adam, Jacob’s Ladder, the Angel of the Book of Revelation, the Red Dragon, and Nebuchadnezzar

I am not claiming some mystical experience with Blake in which Blake taught me. Rather, akin in some ways to the way Blake internalized Milton’s genius, I have found that how I have engaged with Blake is less via conventional exegesis and more by a long process of internalization of the intellectual energy in his work. Blake does get inside one and reshapes the way one reads, views and looks at the world, and for that matter God.

Blake’s “infernal method”: “Blake does get inside one and reshapes the way one reads, views and looks at the world, and for that matter God”

Thus, when reading the opening of The Marriage of Heaven and Hell for the first time after several years, it came home to me what a brilliant encapsulation it is of the way Blake takes one from the paths of ‘ease’ to the ‘wilderness’ as he shares the exuberance of the ‘devils’ and liberation from the priggish and narrow-minded ‘angels’ with their religion of ‘thou shalt nots’, which I’ve internalized for a lifetime. Blake has shown me a way of not being tyrannized by the Bible while at the same time being inspired by it.

What I find in Blake’s work is a clear grasp of the shortcomings of the Bible, in both its contents and its effects in human history, while there is also a clear recognition of the inspiration that it offers. Blake was a true modern in his critique of the Bible but inherited the pre-modern knowledge of and affection for it. 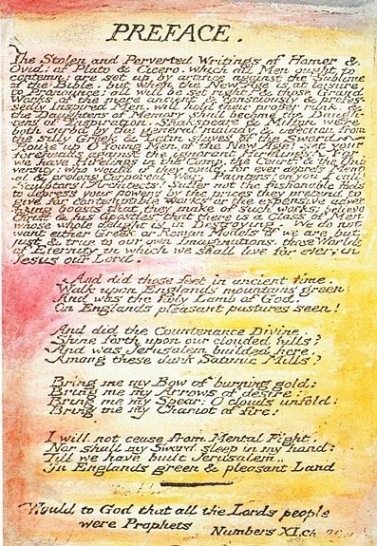 I saw Blake delighting in the Bible, considering that no text however revered should be placed on a pedestal and take the place of the patient and necessary task of learning to relate with others, and indeed using that revered text in imaginative ways.

He stressed the importance of Inspiration and the priority it must take over Memory, and resisted resort to biblical prescriptions. In words that immediately precede England’s unofficial national anthem he writes of the time when ‘professedly Inspired Men will hold their proper rank, & the Daughters of Memory shall become the Daughters of Inspiration’ (Milton A Poem Preface). Blake probably learned from John Milton that inspiration was not ‘to be obtain’d by the invocation of Dame Memory and her Siren daughters, but by devout prayer to that eternall Spirit’ (Reason of Church Government).

“The Letter Killeth, the Spirit Giveth Life”, from Blake’s Job

The prior enriching by the Spirit seems to anticipate Blake’s subordination of reason to inspiration or imagination:

Why is the Bible more Entertaining & Instructive than any other book. Is it not because they are addressed to the Imagination which is Spiritual Sensation & but mediately to the Understanding or Reason. (Letter to Trusler, 1799)

For Blake, the Bible is less a text to be interpreted but contains words that have an effect in whatever form of engagement one has with it. Anthony Thiselton, too, seems to be suggesting that there may be other ways of interpreting texts which may lead to a better understanding when he writes: ‘the biblical texts function with the greatest integrity and coherence with their directedness when they function (where appropriate) as illocutionary acts of address, promise, commission, decree, praise, celebration, pardon, liberation and authorization’ (Thiselton, New Horizons in Hermeneutics). But if we are ‘self-involving’ we also need to be self-critical. What is needed is the casting off of what Blake terms ‘selfhood’. What seems to come across in the final pages of Jerusalem is that it is not just prophetic endeavour that matters but how to avoid the endeavour ending up a massive ego-trip.

The Egoic nature of Morality

For all the extraordinary inventiveness, learning, and wide-ranging scholarship that make up contemporary biblical studies, it is quite possible for a biblical scholar to miss the point of the text unless the effect of the text, whether intended or not – allowing the text to rouze one’s faculties to act – stirs and engages. That is what Blake understood so well and what he practised, even if at times we consider he may have got it wrong. In writing as he did Blake was amazingly prescient, as 200 years later biblical scholarship has begun to catch up with him, and to recognize that many biblical texts, whether prophetic oracles, or New Testament epistles, are texts that were written to have an effect, and understanding their rhetorical content is crucial to their meaning.

On Your Knees and Obsessed with Death: the Orthodox Religious Position

Like the biblical writers, Blake did not write in order either to offer an aesthetic experience or to be a source for history, but to challenge and to edify. Those who engage with Blake’s works as tools of edification will be able to resonate with them and gain insights that may be missed by those who do not read in this way. Anthony Thiselton’s words about the Bible apply mutatis mutandis to Blake’s work (Thiselton). 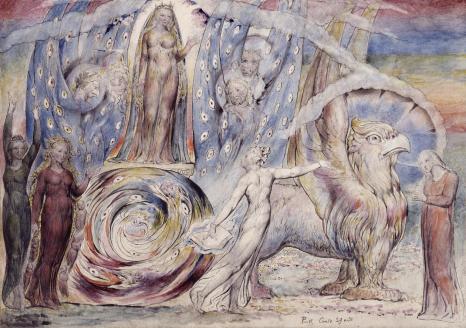 “Blake’s kaleidoscopic use of imagery”

Blake was a master at seeking to allow texts to have effects, and he appreciated why it is that the Bible, allusive and enigmatic as it might be in its different parts, was one of the paradigms for his own imaginative textual creation. Biblical allusions are dotted all over the Blake corpus. The biblical allusions form part of Blake’s kaleidoscopic use of imagery, in which the various ingredients are used to produce ever-new arrangements of beauty, and visual and intellectual meaning.

Blake found in the images of the Bible a stimulus to the imagination and creativity in understanding the vagaries of human life. He didn’t attempt to make the Bible internally consistent, or benevolent. He challenged its depiction of God as a remote monarch and lawgiver, and the use made of such imagery to justify authoritarianism. He saw the Bible being used as a means of keeping people in their places. So, subservience to what had been believed and done in the past ended up giving power to those who were responsible for knowing and transmitting these ideas, thereby snuffing out creativity and imagination.

“He challenged its depiction of God as a remote monarch and lawgiver, and the use made of such imagery to justify authoritarianism”. This plate from Jerusalem reveals the egoic basis of Urizenic morality as a tool of ideological control.

Blake had no truck with those who appealed to the past to maintain the status quo, or to a sacred text, rather than to what human beings, created in the divine image, may be saying now, or struggling to articulate, as they moved forward in their lives. He rejected the idea of the Bible as a divine rulebook, according to which priests and rulers could police people, but saw it as a collection of ‘sentiments and examples’ which engaged the imagination. His life work was dedicated to exposing the extent to which infatuation with those habits of thought separate and demonize, and prevent human flourishing. He had an amazing insight into contemporary economics, politics and culture, and was able to discern the effects of authoritarianism.

Blake carved out an imaginative space with regard to authoritative texts and traditions whether it is the literary legacy of John Milton or the Bible, recognizing their shortcomings as well as being inspired by what they offered him. The peculiar mixture of imaginative existential engagement of the Bible, along with criticism of its shortcomings, articulates and encapsulates a brilliant paradigm. 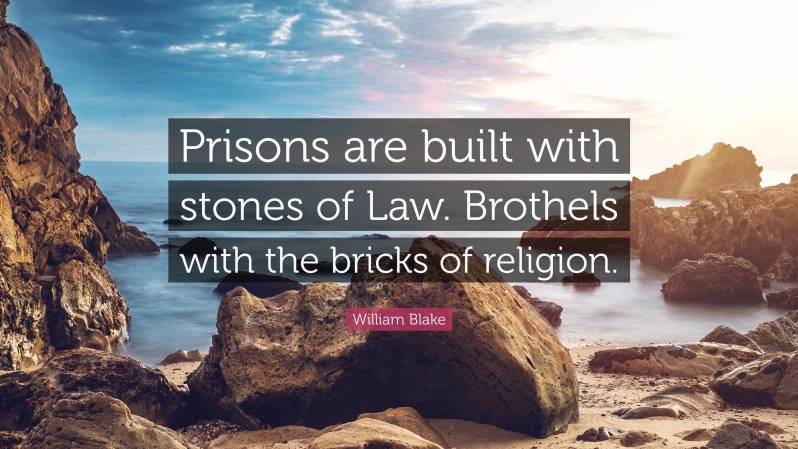 Blake’s work, particularly his writing about and visual exegesis of the Bible, has given me a way of learning to be critical about myself and also about the shortcomings of the Bible, as well as finding in the Bible a word of life. The ‘contrapuntal/dialectical engagement with life’ and with the biblical writings, not only helps me understand Blake but also helps me see an analogy with the way I engage with texts from at least 2,000 years ago and for all their shortcomings find in them hope and comfort as well as critical insight.

Professor Christopher Rowland was Dean Ireland’s Professor of the Exegesis of Holy Scripture and Fellow of The Queen’s College, Oxford from 1991 until 2014 and is the author of Blake and the Bible and Radical Christianity. This article is taken from his latest work, In a Glass Darkly: The Bible, Reflection and Everyday Life (co-written with Zoë Bennett, SCM Press 2016), and is reproduced here with kind permission of David Sherivngton at SCM Press and the author.