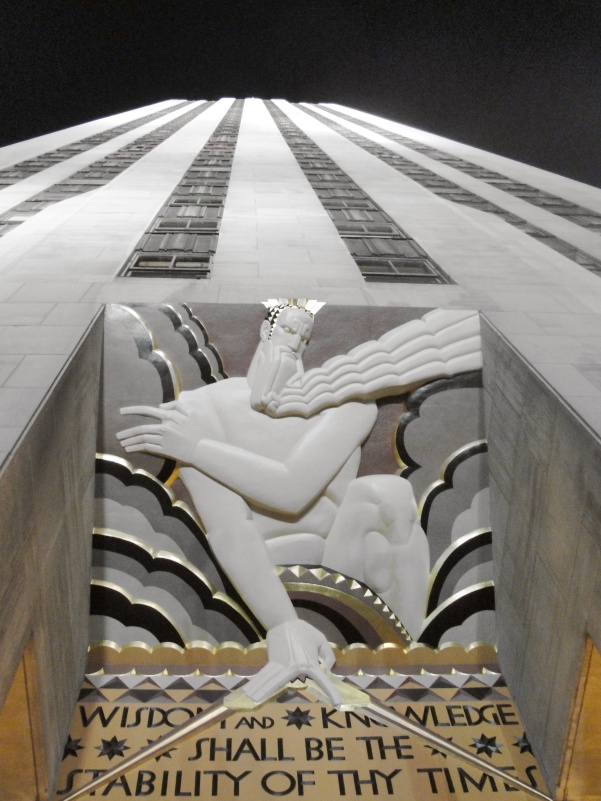 The entrance to the Rockefeller Centre New York draws on Blake’s image of ‘God’, but reversed so that he now divides with his ‘Right’ hand. Presumably Rockefeller didn’t realise that this figure actually represents a dissociated and psychopathic form of hyper-rationality dominating and dividing the world. Or perhaps he did.

In speaking of the basic aims of his art, Blake says: “The Nature of my Work is Visionary or Imaginative. This world of Imagination is the world of Eternity. There Exist in that Eternal World the Permanent Realities of Every Thing which we see reflected in this Vegetable Glass of Nature.”  Thus art was to him not only a means of communicating his own beliefs to others, but actually a primary source of knowledge concerning the divine plan. He defined poetry, painting, and music as “the three Powers in Man of converting with Paradise, which the flood did not Sweep away.”

Imagination – he always calls it “the Divine Imagination” – he considered to be not mere fancy, but a means of visionary perception which God has granted to man to preserve in him a knowledge of his eternal self even while in his fallen state. Dealing with a theme of this character, he found – as other visionary poets have done – that language which has been devised for the everyday activities of this world will not adequately convey his message. His must rely to a large extent on images; these, by their very nature, demand not only perceptiveness on his part in the choosing of adequate symbols to suggest his meaning, but sympathetic imaginative understanding on the part of the reader.

Most poets in search of a readily comprehensible symbolism have employed a traditional mythology which, because of its historical or religious character, is generally known. Thus Dante and Milton drew their images principally from Christian and classical sources. Blake, however, did not choose to use an established mythology and the passage quoted at the head of this section tells us why. The age of neo-classicism had reduced much classical imagery to conceits and trivialities; the dogma of religious sects, he was convinced, had misconstrued much of the material provided by the Bible. Classical mythology he consequently rejected almost completely. From the Bible he drew continually. In most cases, however, his use of Biblical sources is not conventional, but based upon a richly symbolic interpretation of his own, the essence which has been well set forth by a recent critic: “The Bible [to Blake] is not a moral code and a commentary on it: it is a series of visions.” 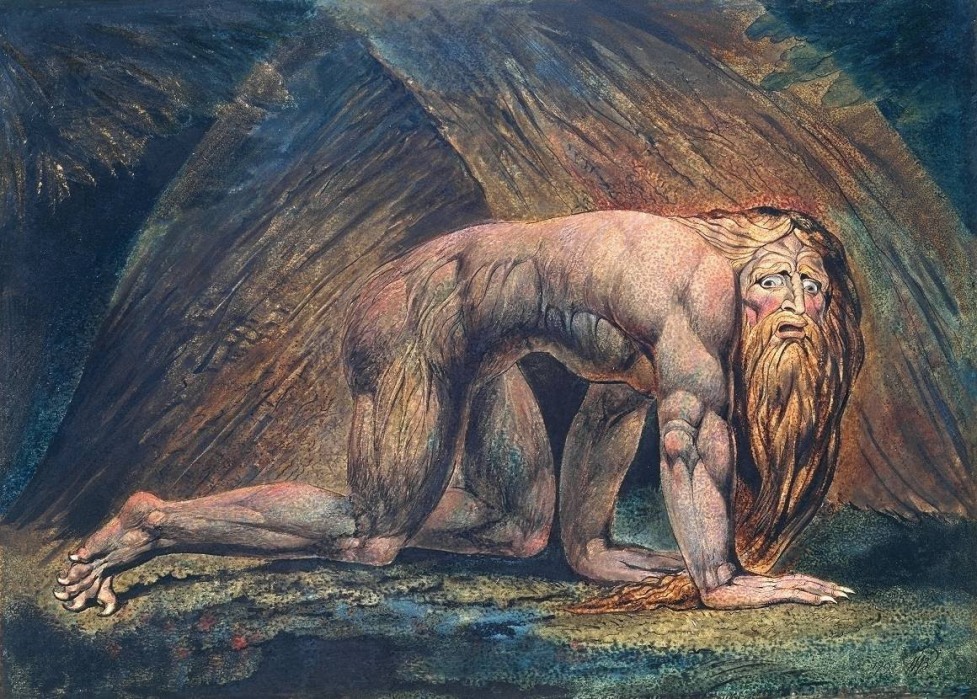 Finally, as these two sources – and such other less familiar mythology as the nordic and the oriental from which he borrowed extensively – did not fully meet his needs, he created an involved mythology of his own.  To this mythology he left us no key and but few obscure hints, for reasons which he set forth in the following statement: “The wisest of the Ancients considered what is not too Explicit as the fittest for Instruction, because it rouses the faculties to act.”  Its structure can be pieced together only by a careful and perceptive reading of all his works and by a study of their accompanying designs. The reader is still called upon to provide for himself much of the insight necessary to understanding. Such a brief examination of the main points of Blake’s mythology as that which follows can only serve as a general guide, and must be considered as such and not as a formula for solving a complex puzzle.

The Divinity of You

When on the evening of Saturday, December 10, 1825, Henry Crabbe Robinson and Blake dined ay the home of the collector, Charles Aders, the discussion turned to religious questions. “I had suggested on very obvious philosophical grounds,” Robinson says in his account of their conversation in his diary, that “an eternity a parte post  was impossible without an eternity a parte ante. His eye brightened on my saying this, and he eagerly concurred—‘To be sure it is impossible. We are all co-existent with God – members of the Divine body. We are all partakers of the Divine nature.’  On my asking in what light he viewed the great question concerning the Divinity of Jesus Christ, he said – ‘He is the only God.’ But then he added – ‘And so am I and so are you.’ ”

This is one of the few recorded instances of Blake’s conversation concerning the nature of his beliefs, but it touches on a fundamental starting-point in a discussion of his ideas. All of Blake’s philosophy stems from his acceptance of the statement in Genesis that God created man in His own image. There is, then, in every man the spark of the divine and the capacity to become one with God. But as man is the image of God, so is God the transcendent image of man. Jesus is referred to throughout Blake’s poems as the “Divine Humanity”:

Thou art a Man, God is no more,

Thine own Humanity learn to Adore.

By the development of the understanding in its widest sense, under the guidance of the imagination, each of us may ultimately return to the perfect unity with God which is eternal life. “He who sees the Infinite in all things, sees God.”  Man, if he were enlightened, would realise this and would seek to develop his power of understanding rather than strive to establish his position in a worldly sense. 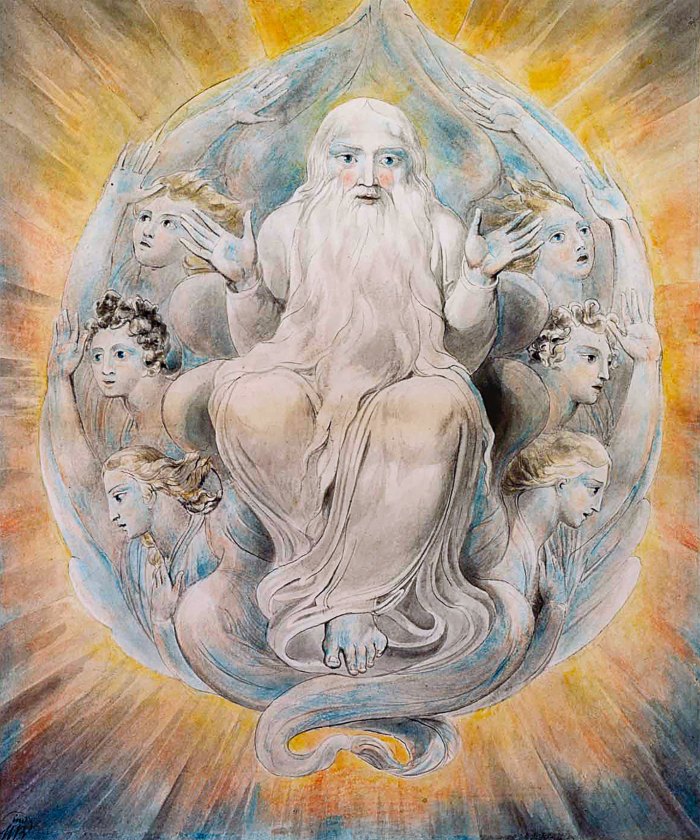 The Revolution of Forgiveness

On the one hand, the divine or imaginative aspect of man’s nature, personified by the Saviour, keeps reminding man of his brotherhood with all men through their common kinship with God:  “I am not a God afar off, I am a brother and a friend: Lo! we are One, forgiving all evil. Not seeking recompense.”

I am in you and you in me, mutual in love divine:

Thy brethren call thee, and thy fathers, and thy sons,

Thy nurses and thy mothers, thy sisters and thy daughters

Weep at thy souls disease, and the Divine Vision is darken’d

Such is the way to eternal joy: love of all men as Sons of God through individual understanding and forgiveness.  “Forgiveness of Sins. This alone is the Gosepl, & this is the Life & Immortality brought to light by Jesus.” 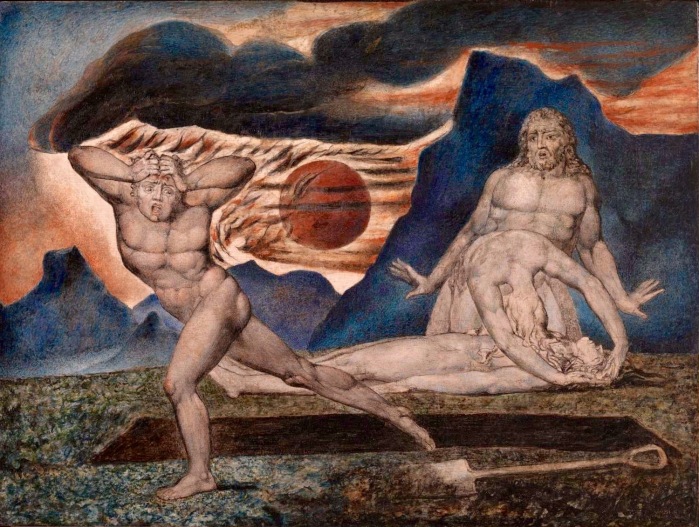 On the other hand, the purely rational side of man’s nature replies to the imaginative by asserting the arguments of self-interest: other men are not brothers, but rivals: the fittest alone will survive and any means to that end are justified. Man therefore makes the choice offered by his selfhood. The Fall takes place and man finds himself in the “valleys dark” of this world: a world where the divine imagination is shut out and we can perceive only the material; a world in which liberty must yield to the control of law; a world which deems love a sign of weakness and gives its applause to those who gain their triumphs at the expense of the death and suffering of others.

The world of our present experience is, therefore, a fallen world. The sufferings of this world are not a punishment inflicted upon man for disobedience to God’s law, for God knows no law but only love and forgiveness. Man has made his free choice, and in error has become a subject of Satan’s realm of cruelty.

Mercy & pity threw the grave stone over me, & with lead

And iron bound it over me for ever  (Jerusalem)

Man in this state, however, does not recognise nor admit his weakness. Rather he postulates that truth is to be learned by codifying the data of the senses; that which lies beyond the range of their experience must be ignored as unreal:

In ignorance to view a small portion & think that All,

And call it demonstration, blind to all the simple rules of life.

Thus do man-made systems grow up. Based on the limited knowledge available to the “Natural Man,” they are at once endowed by him with divine authority, so that other men may be enslaved to his selfhood:

To earth by their narrowing perceptions

They lived a period of years …

And form’d laws of prudence, and call’d them

The eternal laws of God

Hence, in Blake’s view, all accepted social systems become endowed sooner or later with tyrannical power that destroys human liberty. No other course could be possible in a world ruled by Satan [i.e. by man’s unconscious Ego or ravenous “Selfhood”].

Selfhood: The God of this World

Most men will conform through ignorance or fear; those who do not will be ruthlessly destroyed by the “blind world-rulers of this life.”  All accepted orders exist for the benefit of those who spend “their lives in Curbing & Governing other People’s by the Various arts of Poverty & Cruelty of all kinds.” Since men cannot develop their selfhood without hindering others, they are bound either to try to turn established systems to their own uses, or to be enslaved or destroyed by those systems. Governments establish their hold by rigid laws and increase their influence by wars. Social and economic systems give power and wealth to the few at the price of the degradation of the many.

Organised religion is the worst of all, for it claims for itself divine authority and lends its sanction to the political and economic tyrannies which realise its usefulness as a repressive tool. Claiming to uphold the moral claw as decreed by God, it in reality commits the supreme apostasy of setting Satan up for worship under the name of God.

Thus it was that Blake, devoutly religious in all his thought and works, exhibited the apparent paradox of vehemently opposing organised religion. Earthly religion preaches what it claims is God’s law, and stresses not forgiveness of sins but punishment for transgression. But to Blake “The Gospel is Forgiveness of Sins & has No Moral Precepts,” and further he believed that “Every religion that Preaches Vengeance for Sin is the Religion of the Enemy & Avenger and not of the Forgiver of Sin, and their God is Satan, Named by the Divine Name.”

To him it appeared that the churches exalted the Decalogue and its author, the “Angry God of this World”, while presenting Jesus as a secondary figure, cast in a sentimental light, far removed from his revolutionary role as the advocate of forgiveness.

To Blake, this world is itself Hell, and its God, while called Jehovah by the churches, is in reality Satan. “In Hell all is Self Righteousness; there is no such thing there as Forgiveness of Sin; he who does Forgive Sin is Crucified as an Abettor of Criminals, & he who performs Works of Mercy in Any shape whatever is punish’d &, if possible, destroy’d, not thro’ envy or Hatred or Malice, but thro’ Self Righteousness that thinks it does God service, which God is Satan.”

All of the blindness of human life to the true glory of the eternal world thus resolves itself into the essential error of subordinating the individual to man-made systems, while God intended for him no system, but only self-determination – liberty in its widest sense. Blake sums up his entire point of view in the pithy and marvellously striking and compact epigram in The Marriage of Heaven and Hell, “Prisons are built with stones of Law, Brothels with bricks of Religion.” World institutions are thus “A pretence of Art to destroy Art; a pretence of Liberty to destroy Liberty; a pretence of Religion to destroy Religion.”

This is an excerpt from Albert S. Roe’s classic work, Blake’s Illustrations to the Divine Comedy, one of the best introductions to Blake’s symbolism and especially his take on Dante. To read the full book please click here.