The Nature of the Spiritual Revolution 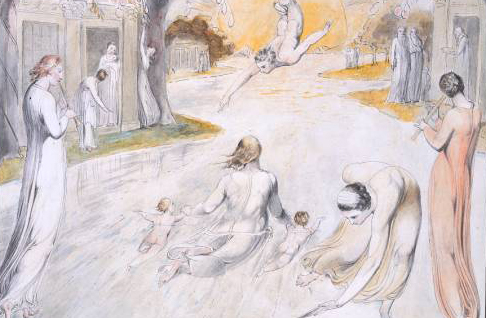 Jesus the man, according to Blake, was the son of an unidentified human father; he was begotten out of wedlock; thus from the beginning he was an offence against the Law. The girl Mary was “innocently gay & thoughtless” (LJ); her illicit act was one of free love in obedience to the Holy Ghost within her; it was the fulfilment of the purpose of her existence. (In the picture “The Assumption of the Virgin” she flies upward, not towards the Trinity, but towards the Babe.) Joseph understood this, and his forgiveness of his adulterous betrothed was one of the great examples of the Forgiveness of Sins (Jer: 61).

“In the picture ‘The Assumption of the Virgin’ she flies upward, not towards the Trinity, but towards the Babe”

Jesus’s illegitimacy was kept a secret: it was not known to the neighbours in Nazareth (Matt xiii:35; Luke iv:22), or to those who hailed him as a descendant of David (Matt xxi:9; xxii:42, etc.), or to the compilers of the genealogies in Matthew and Luke, both of whom agree (and agree only) in tracing his descent from David through Joseph.

The picture showing the boy learning carpentry from Joseph is entitled ‘The Humility of the Saviour’; but when he was twelve, he defied his mother and renounced Joseph in the temple: to Mary’s reproof, “Behold, thy father and I have sought thee sorrowing,” he replied, “Wist ye not that I must be about my Father’s business?” (Luke ii:49).

‘Christ in the Carpenter’s Shop: The Humility of the Saviour’ by William Blake. Blake shows Christ with a set-square and compasses, symbols of rational knowledge, instead of the traditional carpenter’s tools. The compasses or dividers link this watercolour with the symbolism of the frontispiece to Europe, the famous ‘Ancient of Days’.

Blake agreed with the Deists that Christ never performed any miracles which violate the laws of physical nature. “The manner of a miracle being performed is in modern times considered as an arbitrary command of the agent upon the patient, but this is an impossibility, not a miracle, neither did Jesus ever do such a miracle … I cannot do a miracle thro’ experiment & to domineer over & prove to others my superior power, as neither could Christ … Christ & his Prophets & Apostles were not Ambitious miracle mongers” (On Watson).

The resurrection of his physical body was also a myth. Los and Enitharmon see “the Crucified body … still in the Sepulchre” when “Jesus stood beside them in the spirit” (FZ ix:2-4). “It is raised a spiritual body” (I Cor xv:44).

He called himself the “Son of Man,” a phrase which Ezekiel used constantly to describe himself when directly inspired by God; Daniel also used it once in his vision of Him who shall have everlasting dominion (Dan vii:13-14). Believing in his mission, Jesus considered himself the chosen Messiah but did not consider himself the Son of God in any special sense. When the Jews accused him of setting himself up as God (John x:33), he replied by quoting Psalm lxxii:6: “Ye are gods, and all of you are children of the most high.”

“Thought is Act. Christ’s Acts were Nothing to Caesar’s if this is not so” (On Bacon).

“I tell you, no virtue can exist without breaking these ten commandments. Jesus was all virtue, and acted from impulse, not from rules” (The Marriage of Heaven and Hell)

A transgressor from the womb, he offended the Law both in his begetting and in his death. He was a born revolutionist in the spiritual world, and broke, at least by implication, every one of the Commandments (MHH 24). “Was not Christ marter’d because he taught that God loved all Men & was their father & forbad all contention for Worldly prosperity, in opposition to the Jewish Scriptures … Christ died as an Unbeliever.” (On Watson).

The universal paternity of the all-loving Father signifies the Brotherhood of Man, the only basis for a peaceful society. But this must rest upon the freedom and development of the Individual, for “What is Liberty without Universal Toleration?” (On Boyd). And “Toleration” is a weak word for the Forgiveness of Sins, the greatest of Christ’s spiritual discoveries, which had been completely overlooked by the pagan philosophers.

This revolutionary doctrine, which made Mercy the outstanding attribute of the Father, abolished the standards of Good and Evil and abrogated the whole system of Justice, which is based on the Ten Commandments. The clearest example of this doctrine was the forgiveness of the woman taken in adultery.

“Plato did not bring Life & Immortality to Light. Jesus only did this” (On Berkeley).

Jesus is the Human God. “Human Nature is the image of God” (On Lavater), because we were made in his image (Gen i:27). “[Jesus] is the only God … And so am I and so are you” (CR). “We are all co-existent with God – members of the Divine body. We are all partakers of the Divine nature” (CR). Whatever individuality or genius we have is the divine within us. “Thou art a Man, God is no more [than Man], Thy own humanity learn to adore,/For that is the Spirit of Life” (EG).

Lavater wrote: “He who hates the wisest and best of men hates the Father of men; for, where is the Father of men to be seen but in the most perfect of his children?”  Blake altered “hates’ to “loves,” underlined the last clause, and commented: “This is true worship”.  “The worship of God is: Honouring his gifts in other men, and loving the greatest men best: those who envy or calumniate great men hate God; for there is no other God” (MHH 22). In Jerusalem (91:8), Blake expanded this: “The Worship of God is honouring his gifts in other men: & loving the greatest men best, each according to his Genius, which is the Holy Ghost in Man; there is no other God than that God who is the intellectual fountain of Humanity. He who envies or calumniates, which is murder & cruelty, murders the Holy-one.” “He who despises & mocks a Mental Gift in another, calling it pride & selfishness & sin, mocks Jesus the giver of every Mental Gift, which always appear to the ignorance-loving Hypocrite as Sins; but that which is Sin in the sight of a cruel Man is not so in the sight of our kind God” (Jer 77).

“Human Nature is the image of God”

Jesus is the source of everything. “Around the Throne Heaven is open’d & the Nature of Eternal Things Display’d, All Springing from the Divine Humanity. All beams from him (LJ). “Jesus is surrounded by Beams of Glory in which are seen all around him Infants emanating from him; these represent the Eternal Births of Intellect from the Divine Humanity” (LJ).

“Every thing is good in God’s eyes” (CR). Impartially “he gives his rain to the Evil & the Good, & his Sun to the Just & the Unjust” (On Dante, paraphrasing Matt v:45). “Nothing is displeasing to God but Unbelief & Eating of the Tree of knowledge of Good & Evil” (LJ).

Jesus is the Imagination, the creative power which is the core of man’s being. “All Things are comprehended in their Eternal Forms in the divine body of the Saviour, the True Vine of Eternity, the Human Imagination” (LJ). Blake did not distinguish between the two natures of Jesus as defined in the Prayer Book: the Divine and the Human were identical in him; because he is Human, he is Divine.

S. Foster Damon was an American academic, a specialist in William Blake, a critic and a poet. He is perhaps best remembered for his ground-breaking work A Blake Dictionary (1965), from which the above article is taken. It remains the key text for any student of Blake.