Seeing and Not Seeing: The Nature of the Modern Rational Self 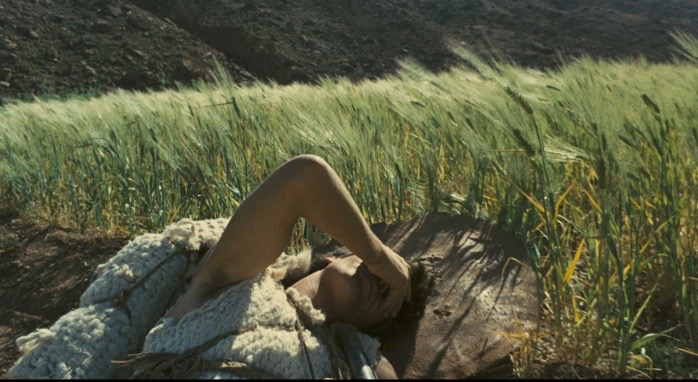 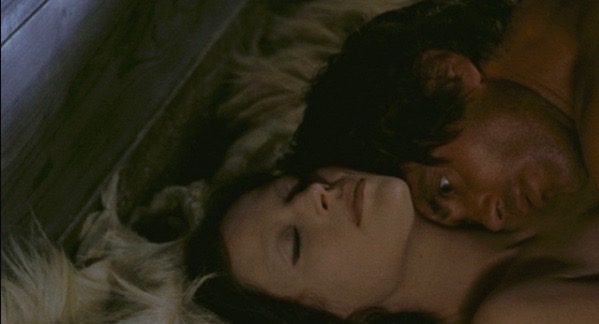 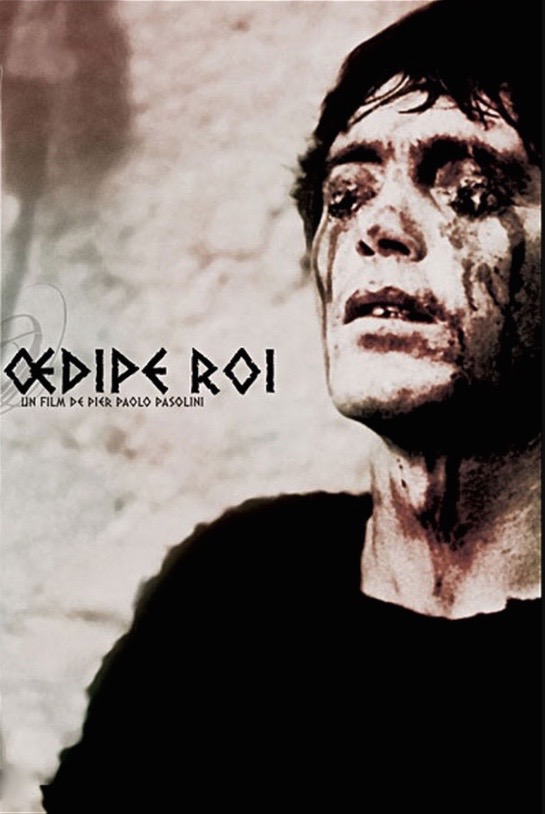 Pier Paolo Pasolini’s remarkable film version of the story of Oedipus, true to both Sophocles’s original drama and yet filled with more contemporary, Freudian meanings and undertones, is one of the great achievements of modern cinema: both disturbing and revelatory. For anyone interested in the Oedipus complex (which, let’s face it, is all of us), this film is a must see (unless of course, like Oedipus, you don’t want to see).  With a shocking – in the sense of arresting and very unexpected – final scene, shocking for its beauty and sudden shift of meaning.

It’s a remarkably modern-feeling – almost shamanistic (as perhaps the original Greek dramas were) – version of this story. It feels both very contemporary and very ancient – seemingly fittingly so, for such an archetypal theme.

Pasolini generally follows Sophocles’s original text quite closely (rather then Freud’s significant and interesting inversion of it), in which the Oedipus Complex seems to originate in the parents, not the child: the father’s intense jealousy and dislike for the child that has usurped him in the mother’s eroticism, and the mother’s culpability in possessively eroticising her relationship with her child. 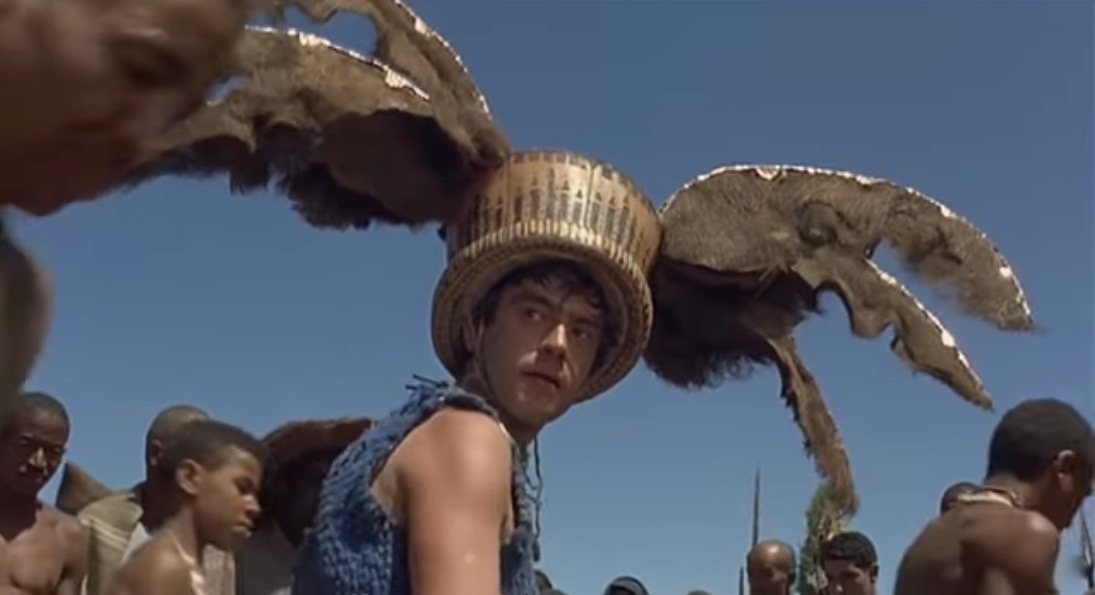 almost shamanistic: “It feels both very contemporary and very ancient – seemingly fittingly so, for such an archetypal theme.“

This reading seems to (healthily) remove the burden of neurotic guilt from the child, and put it back onto the parents, where it perhaps belongs – rather than sexually invert it all and make generations of adults feel like they want to kill their dads and rape their mothers. Freud himself seems to have had an intense and a pronounced Oedipus (mother) complex as a child (see Breger, Freud: Darkness in he Midst of Vision, 2000); and notoriously (and perhaps unconsciously) turned his patients’ stories of (actual) sexual abuse from their parents into an inverted and projected myth or fantasy of abuse. In Sophocles’ and Pasolini’s telling, Oedipus becomes an agent not of action but of reaction – bringing to consciousness the unconsciousness of his parents’ hidden drives.

“A man who has been the indisputable favourite of his mother keeps for life the feeling of a conqueror, that confidence of success that often induces real success.” Mother Love: Sigmund Freud (at age 16) with his mother in 1872.

Pasolini’s film also powerfully brings home the idea that the effects of this unconsciousness, this choice not to know, are communal – not simply individual. The whole city becomes sick (sound familiar?) – an epidemic of distress  and mental suffering. As the Jungian analyst James Hillman acutely observed, “The next step is to realize that the city, where the body lives and moves, and where the relational network is woven, is also psyche. City strongly affects psyche. Better said: city is psyche”.

The Oedipus complex is not therefore something personal but something structural, something collective – something ‘complex’, as the name suggests. It is to do with how states are organised – how families are organised (the institution of state-backed family as “the scene of violation and violence” as Theodore W. Jennings puts it, rooted in the relatively recent post-Babylonian concept (or construction) of children as “possessions”, the cause of the Oedipus complex, “and the domination that follows from possession”. 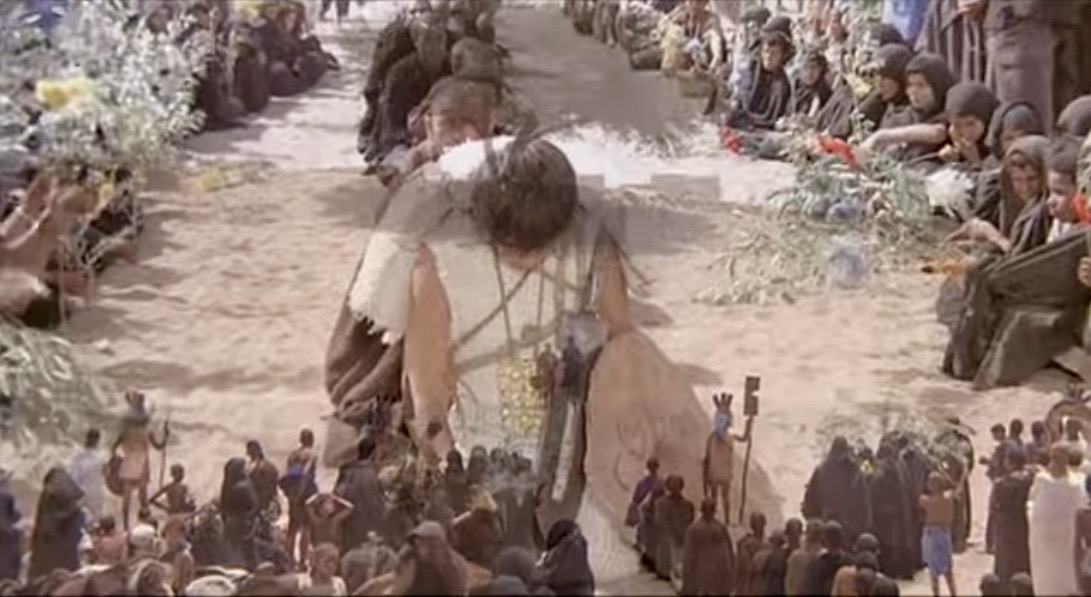 “The whole city becomes sick – an epidemic of distress and mental suffering. The Oedipus complex is not therefore something personal but something structural, something collective – something ‘complex’, as the name suggests. It is to do with how states are organised.”As Jungian analyst James Hillman notes, it is not just that psyches exist within cities: “What goes on in the city is not merely politics or economics or architecture. It’s not even ‘environment’; it’s psychology. Everything ‘out there’ is you.”

See also Zepf’s excellent Oedipus and the Oedipus Complex: A Revision (Routledge, 2016) for a compelling revision of the story, “revealing it to be a drama staged not by Oedipus but by Jocasta, the mother, and Laius, the father. For neither Sophocles’ drama nor the Oedipus myths give any indication that Oedipus is enamoured of Jocasta and born with the intention of killing his father Laius. What the myths do mention are Jocaste’s passion for Oedipus whom she loves more than his father and Laius’ desire to eliminate Oedipus as his rival from birth.”

Equally brilliant and disturbing, this is a compelling analysis of writer and film director Pier Paolo Pasolini’s searing analysis of power, a potent aspect and corollary of the Oedipus story, and how modern consumerist society powerfully perverts and distorts, and degrades, each one of us. It also suggests how power distorts the human body itself – our experience of embodiment. “It is a metaphor of what power does to the human body”, as Pasoloni himself notes. Featuring commentary by Chomsky, Neil Bartlett, and others. Watch the documentary here: https://www.youtube.com/watch?v=xqD_ICTcV70

As the BPI note in their review of Pasolini’s Oedipus, “In the first of his colour films, Pasolini achieves a startlingly exquisite depiction of the desert and colossal ancient cities of Thebes and Corinth, using the unrelenting Moroccan sunlight to superb visual effect. While the majority of the film takes place in this mythic reimagining of ancient Greece, with fantastical costumes and eye watering landscapes, the story begins and ends in 1970s fascist Italy.

The exquisite camera work, at once grand and intimate, implicates us in Oedipus’ fate. In the opening sequence, Jocasta (Silvana Mangano), with Oedipus at her teat turns to look directly into the camera; knowing, amusement and trepidation all flash across her face. Here, and again at other times, Pasolini acknowledges the omnipresence of the truth, known to all but the resistant Oedipus.

The contrast of 1970s Fascist Italy and the fantastical, carnival-esque quality of the ancient Greek plains, mirrors Pasolini’s desire to free his work from the rampant consumerism engulfing Italy at the time. He may in fact be drawing a parallel between what he saw as inexorable homogenisation of his pre-industrial Italy, and Oedipus’ demise. The epilogue set in 1970s Italy finds Oedipus cast from society and this clutches at the viewer more suddenly and deeply than his exile from Thebes.”

David Forgacs, UCL: “Pasolini’s analysis, which I think was very unusual, very distinctive at the time, was that, if you like, the visible face of democratic society and the apparent face of everybody having free access to consumer goods, was actually the acceptable face of something very unacceptable. Which was a coercive use of the concentration of private ownership, the concentration of political power in a few hands, which needed the consent or support of ordinary people through consumer society to keep itself going.” In mythic form this is also surely the story of Oedipus Rex: the coercive use of personal “ownership”, the toxic “concentration of political power” within one family, and what this does to the individual psyche.

Pier Paolo Pasolini (1922–1975) was an Italian film director, poet and writer, as well as a gifted actor, journalist, novelist, playwright, and political figure. His films included Accattone (1961),  The Gospel According to Matthew (1964), Oedipus Rex (1967), and Salo, or the 120 Days of Sodom (1975). His unsolved murder in November 1975 prompted an outcry in Italy and its circumstances continue to be a matter of heated debate. As one biographer observed, he was “one of the most important and innovative figures in postwar Italian culture, whose influence, both within Italy and internationally, has continued to grow in the decades since his death.”

This is the best link to follow to watch the film: Pasolini’s Oedipus Rex. 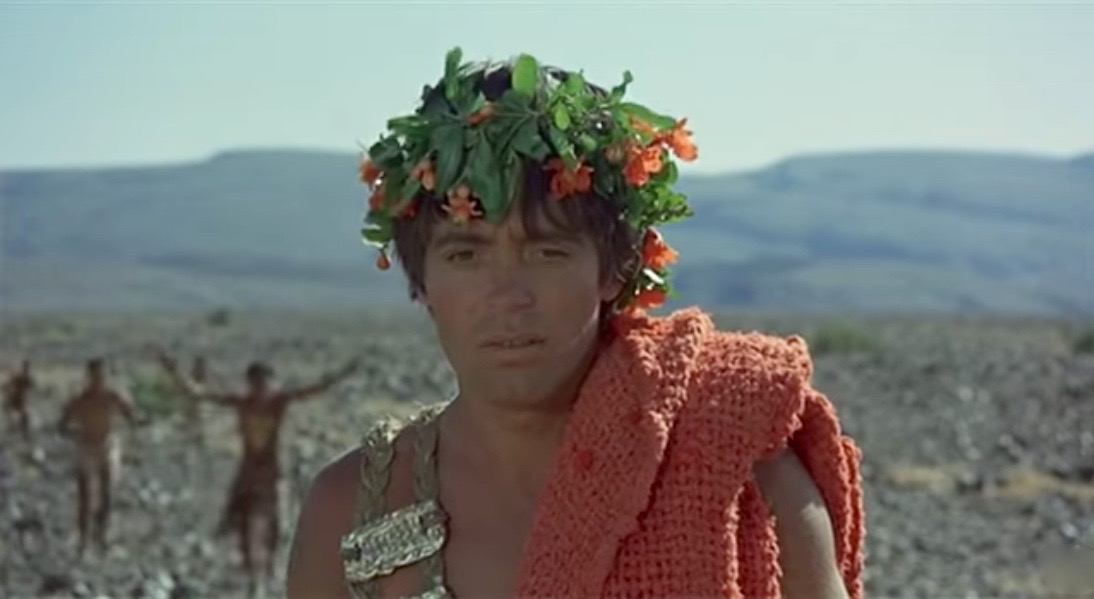 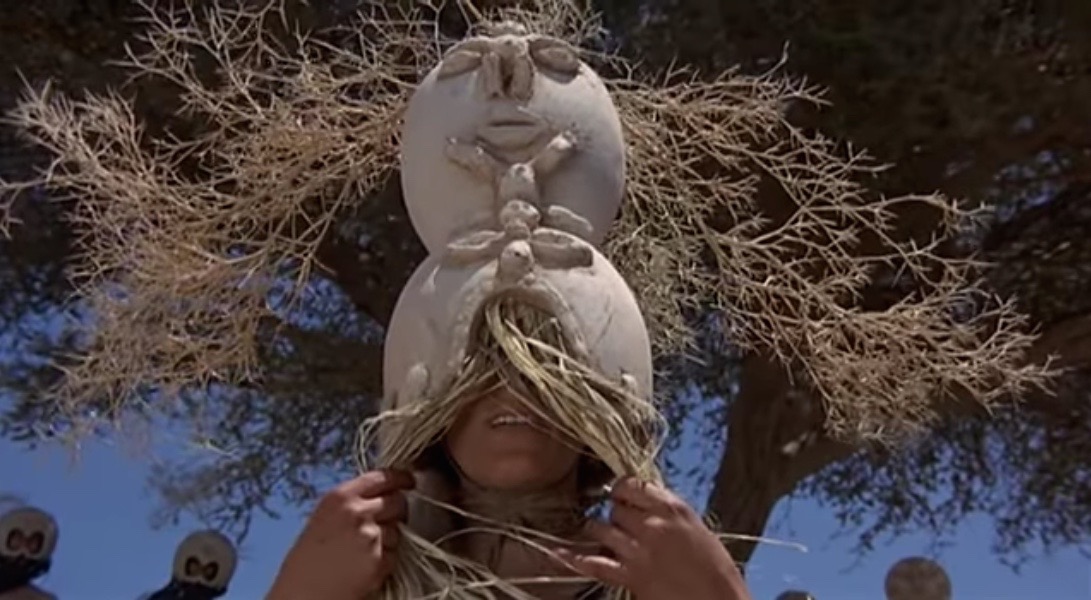 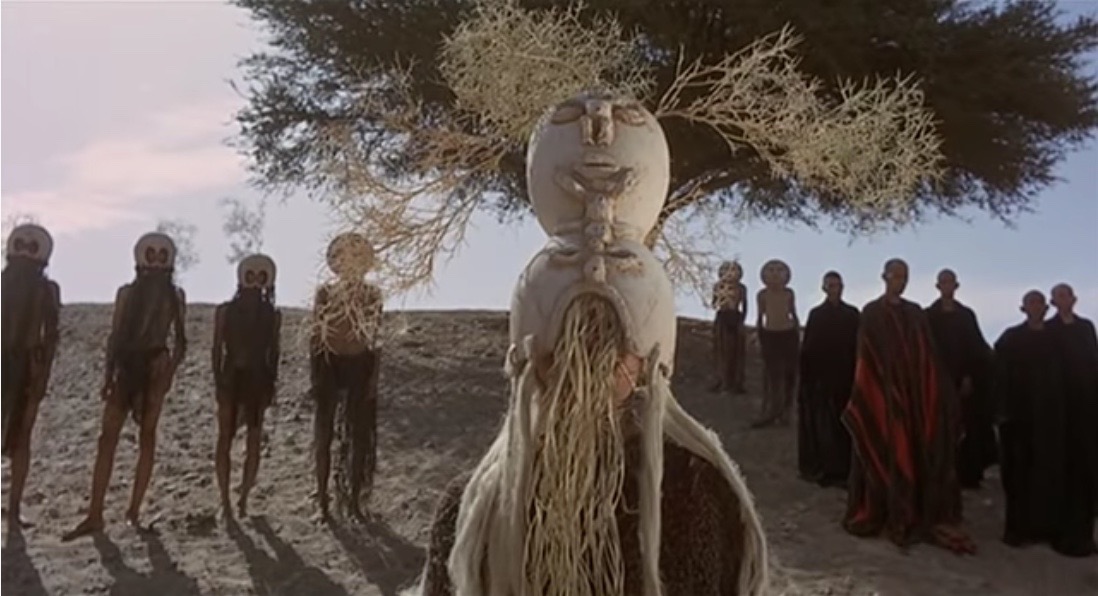 “The film is simply gorgeously rendered. Pasolini felt that the prologue to the film, which is completely free from dialogue (indeed, much of the film plays out without words, even utilizing inter-titles to show thoughts rather than have characters express them), was the best work he’d ever done up to that point. Given that it’s one of the most lyrical and moving passages I’ve ever seen in anyone’s film, I’d be shocked if he wasn’t right. The rest of the film plays along similar lines, keeping things as spare as possible, letting the characters’ actions speak for them. This not only makes for terribly compelling cinema, but it becomes important later when their words so often contradict what they do. Since we’ve come to know these people through their behavior, we instantly see right through their words.” (Scott Nye)