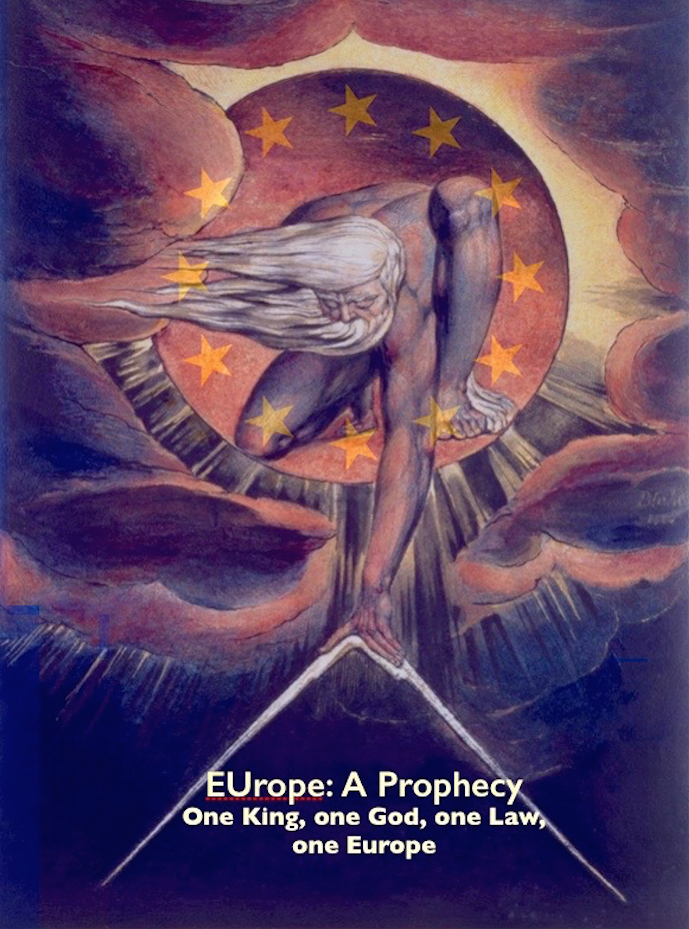 Introduction to the poem, by Robert MacLean

Europe: a Prophecy does not set out to be prophetic in the conventional sense: it does not set out to predict the future. Rather, according to Paley (in Dörrbecker), the function of the prophetic form is “to expose the otherwise hidden motives and consequences of human decisions”. As Dörrbecker explains: “it is a ‘prophetic’ mode of historical representation as interpretation” where “the history of the immediate past is recounted as an exemplum with a view towards the future”. 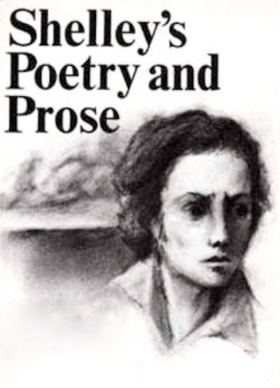 Shelley once said that prophets are those who can see not into the future but into the present. Prophecy is therefore a form of political psychoanalysis: “to expose the otherwise hidden motives and consequences of human decisions”.

According to Piquet, Blake’s Europe slides in comfortably beside a variety of apocalyptic poems written between 1790 and 1820 by several authors including Destiny of Nations by Coleridge and Shelley’s Queen Mab, described by one critic as being ‘the most revolutionary document of the age in England’ (Cameron). Piquet suggests that all of these poems offer a transposition of Biblical books in a “different key”. He suggests that they conform to a “millenarian” outlook where history is presented from a panoramic viewpoint. The poet/prophet uses flashbacks and anticipations of the future to simultaneously control the three dimensions of time: “a past brimming over with injustice and oppression, a present in which pent up energies break out, an imminent future marked by the advent of a Regained Paradise and the end of a woeful history of human suffering”.

Freemasons were the architects and drivers of the progressive revolutions in France and America (La Fayette, Voltaire, Condorcet, Mirabeau, Danton, and Marat were all Masons), and one of their key symbols, the architectural compasses, appears on the frontispiece of Blake’s poem, suggesting links between politics, occult symbolism, material revolution, and depth psychology.

When considering Europe in the context of Blake’s other Continental Prophecies, critics have often read it as a glorification of the French Revolution – heralding an impending end to the old order and the beginning of a universal liberation of mankind. However, this is just one interpretation. Competing theories suggest that Blake may have intended the Continental Prophecies to highlight the inherent limitations of political revolutions. Dörrbecker describes the multitude of different interpretations and readings of Blake’s poetry as “the principle of rhetorical indeterminacy” where the reader is forced into an “actively hermeneutic role” through interpreting meaning. Readers are obliged to make interpretative choices and thus “participate in the construction of ‘meaning'”. 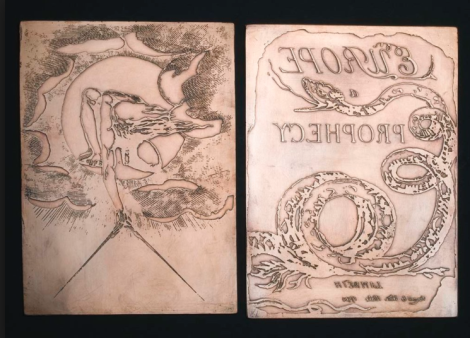 Blake’s poetry does not tell you what to think, it tells you how to think. His illuminated plates, fusing and subverting image and word, left and right, form and content, are all about integrating the various different systems in man through the actual experience of encountering them.

Europe comprises eighteen plates engraved, printed and coloured by Blake’s own hand. Blake was not a fan of ordinary typography, instead preferring that his major poems and epics should be read only in the illuminated printing style that he had designed. This process, which combines text and image, was apparently intended to mirror the appearance of medieval manuscripts. Europe, produced in 1794, was one of the earliest examples of this new technique.

Blake created his own mythological creations to populate his poems and paintings: concepts and ideas became personified into universal representations. He used these mythological characters to explain and act out his singular view of history. Europe sees the interaction between Los (the imagination and eventual source of redemption) and his emanation Enitharmon, who represents pity. They have given birth to Orc, the spirit of energy – another important force for salvation. The poem describes Enitharmon’s dream as she sleeps for eighteen hundred years. According to Dörrbecker the dream sequence allows Blake to explore “the growth of the old order, of the unholy alliance of organized religion with tyrannical monarchy, and the challenge confronting the ancien régime in the revolution at the end of the Eighteenth Century”. 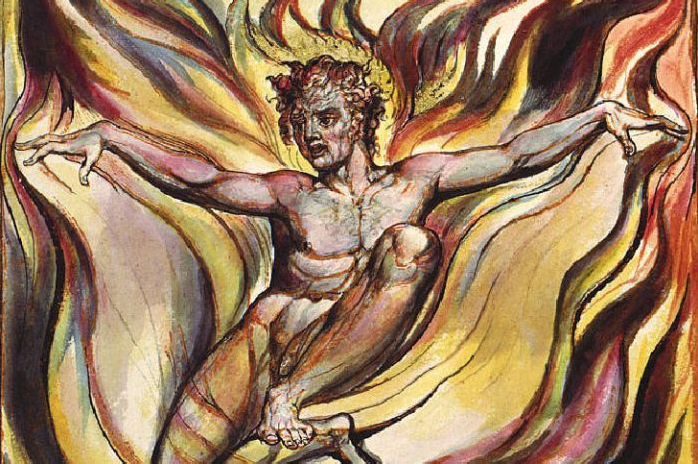 Europe is caught between two revolutionary moments: the birth of Jesus, who’s teaching and being promised peace but whose religion brought war, and the second incarnation of this revolutionary struggle, Orc, whose collective birth is forged through violence and riots but whose professed ideology is global union.

The poem opens with a reference to the birth of the “secret child” who causes war to cease: an obvious reference, according to Dörrbecker, to the birth of Jesus. It closes with Orc, who has become free from bondage, appearing “in the vineyards of red France” as an apocalyptic second coming.

The following series of images contain all eighteen pages from Blake’s prophecy. It is only recently that these high resolution versions of his work have become publicly available. As 21st computer technology improves, we are finally getting a chance to encounter and to enter these astonishing, luminous, multi-media and polyvalent worlds, and to fully appreciate the extraordinary achievement of Blake as a radical political artist. Blake’s work is frequently multiperspectivist, non-linear, and rather obscure, so for those unfamiliar with how it operates on the viewer it’s often best to simply let the images and verse wash over you at first, as if in a dream – perhaps just notice colours, or the relationships between the plates and figures, and what they suggest to you. Blake deliberately crafted his poetry and images in order to bypass the conscious, ‘rational’ programs of the brain – what we think of today as ‘left hemisphere’ brain processes – in order to target and access the deeper and more implicit and intuitive programs of the right brain. As he himself noted, his work was “addressed to the Imagination which is Spiritual Sensation & but mediately to the Understanding or Reason”. This allows deeply subversive and liberating processes and ways of seeing to enter the viewer’s consciousness, without the rational, judgmental mind being aware of it. Rather as in meditative practice, or standing before a work of art in a gallery, simply allow the mind (the right mind!) time to process and encounter these vast, spectacular images and follow where it goes. The text itself is available here for reference if needed – some of the words and passage are rather hard to make out, even in high-res reproductions. In the following blog I provide additional notes on each image, to hopefully provoke further thought, but their real magic is what they stimulate in the viewer’s own consciousness. 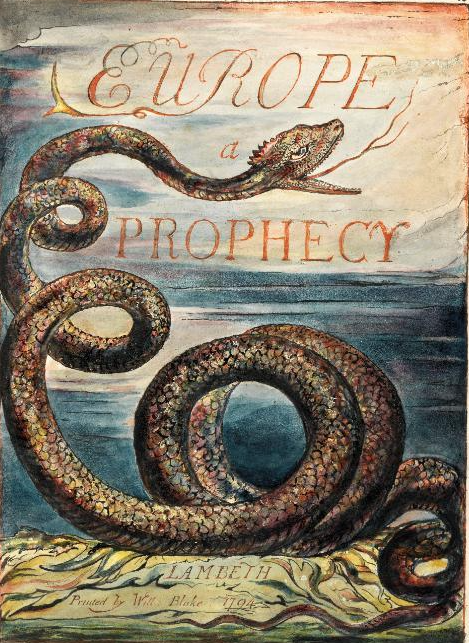 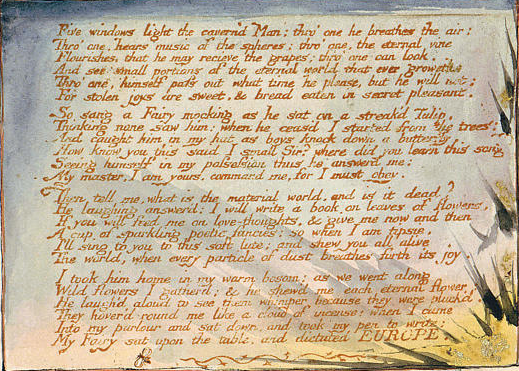 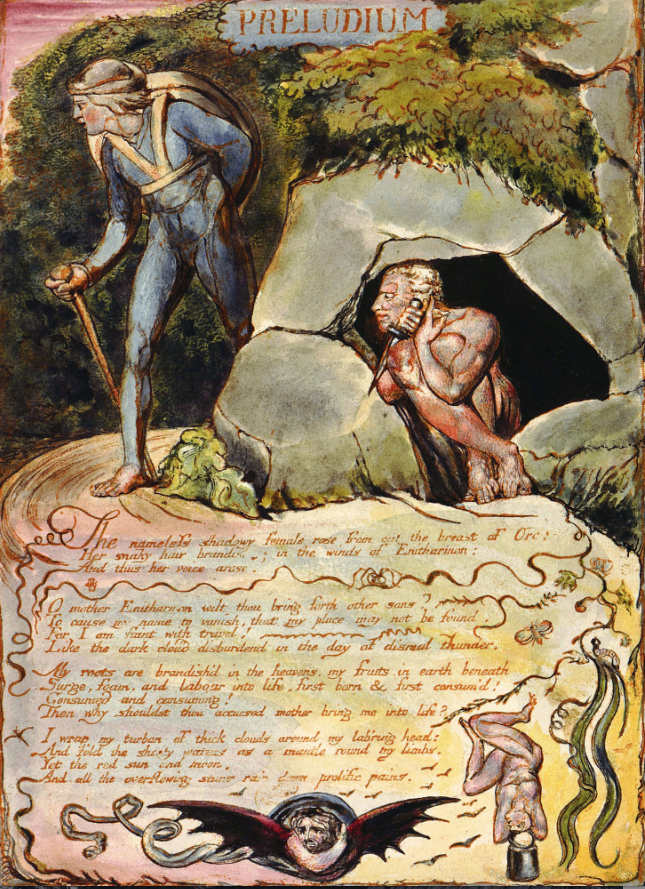 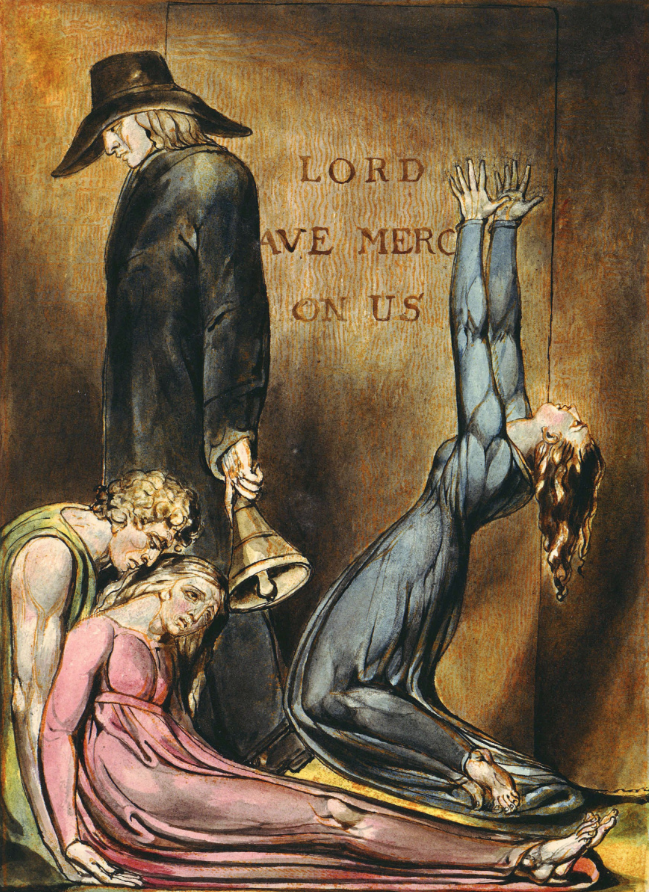 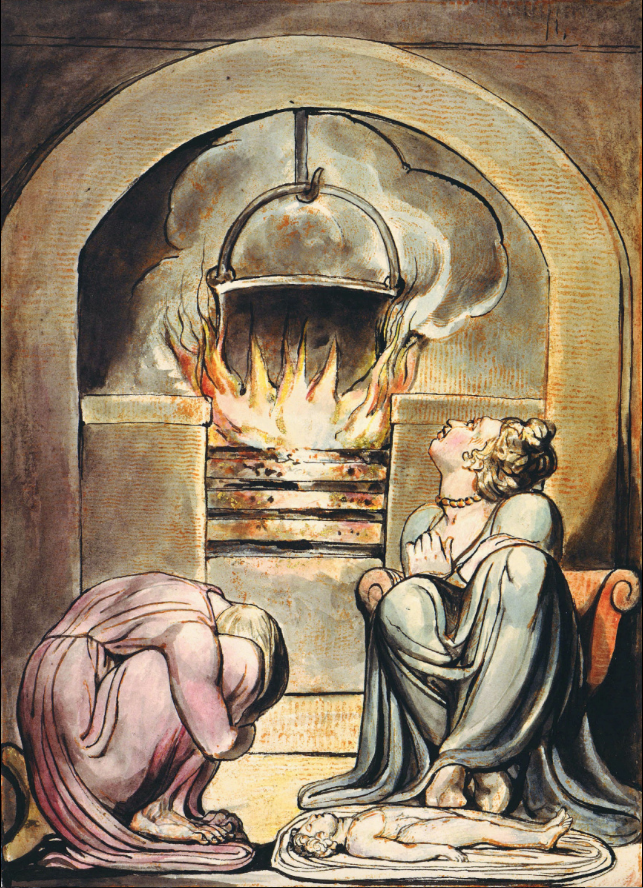 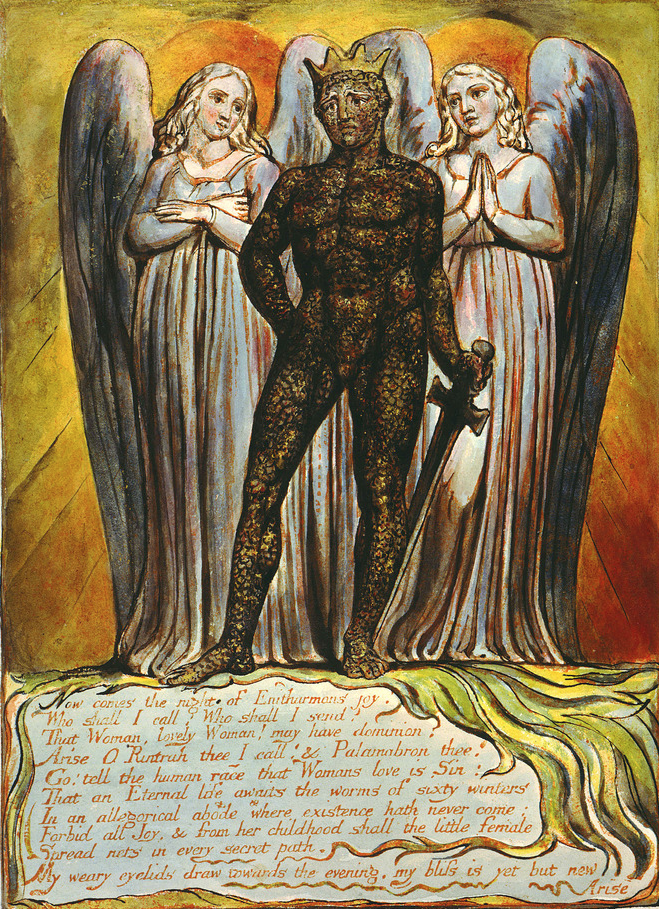 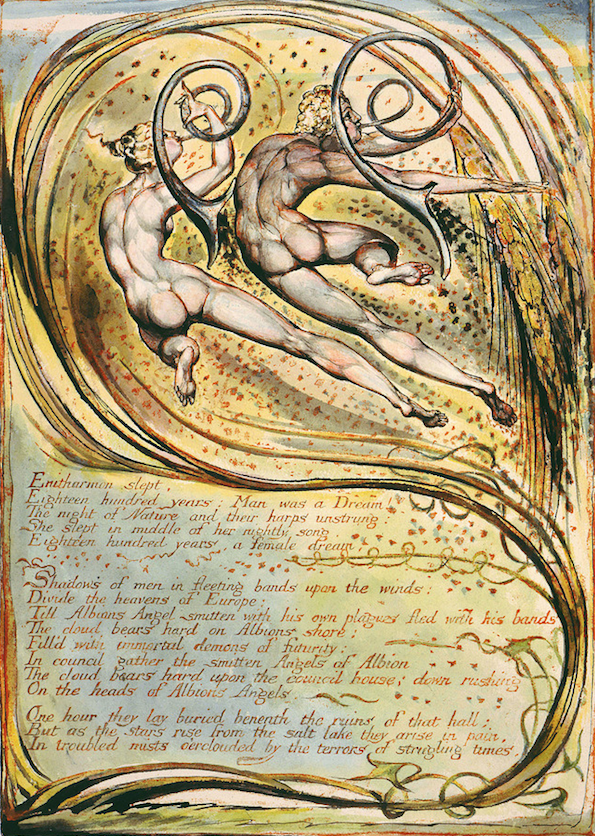 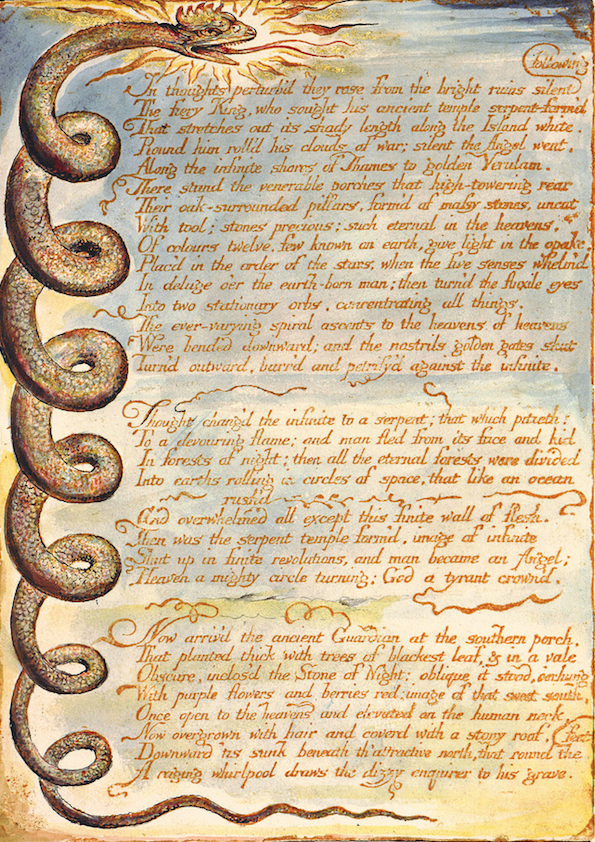 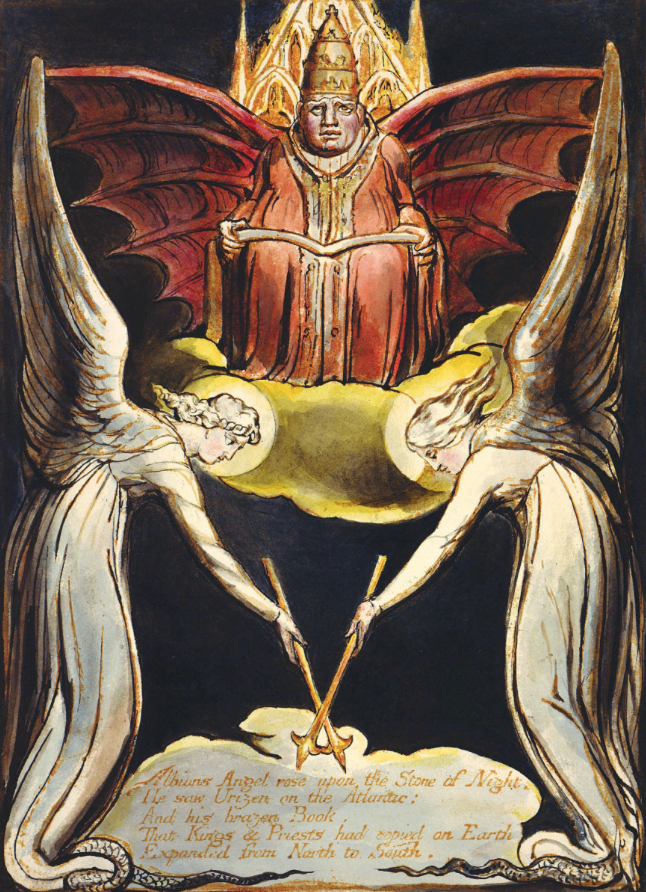 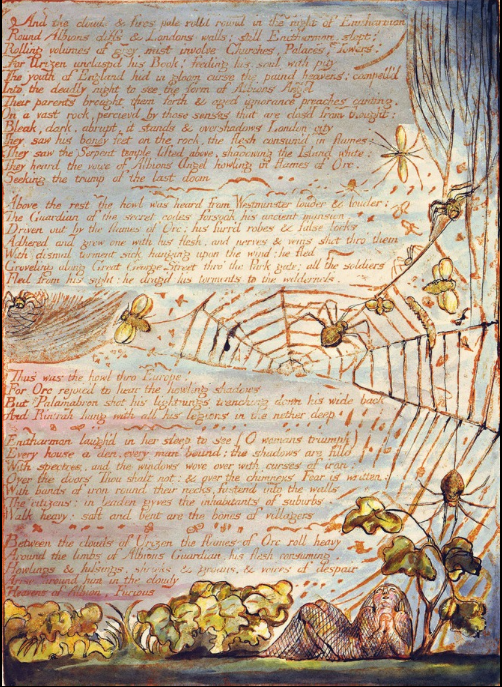 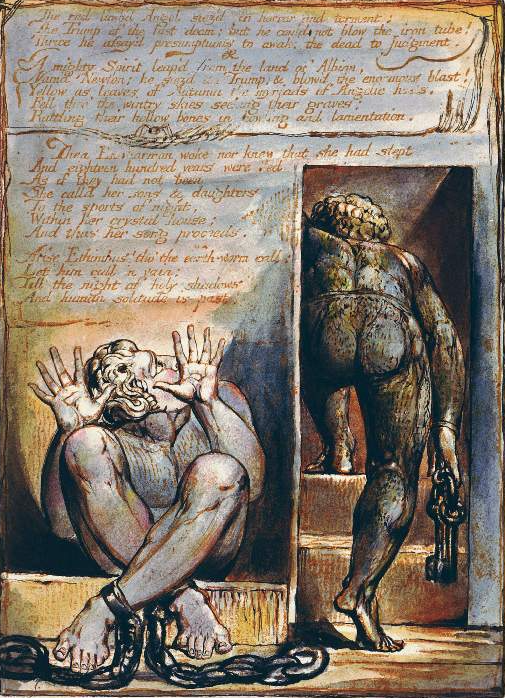 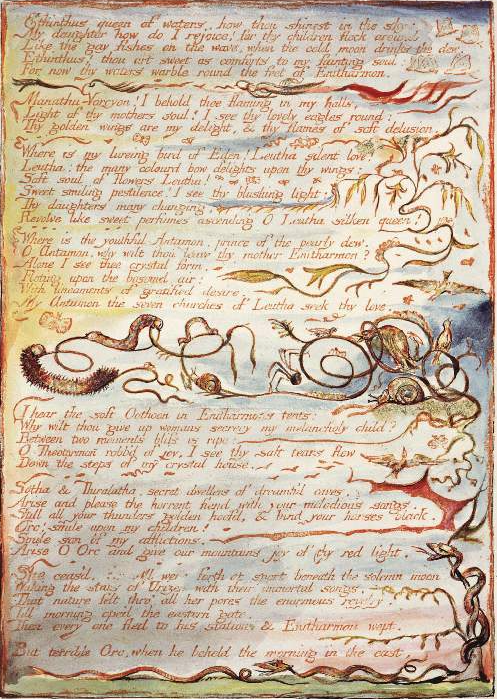 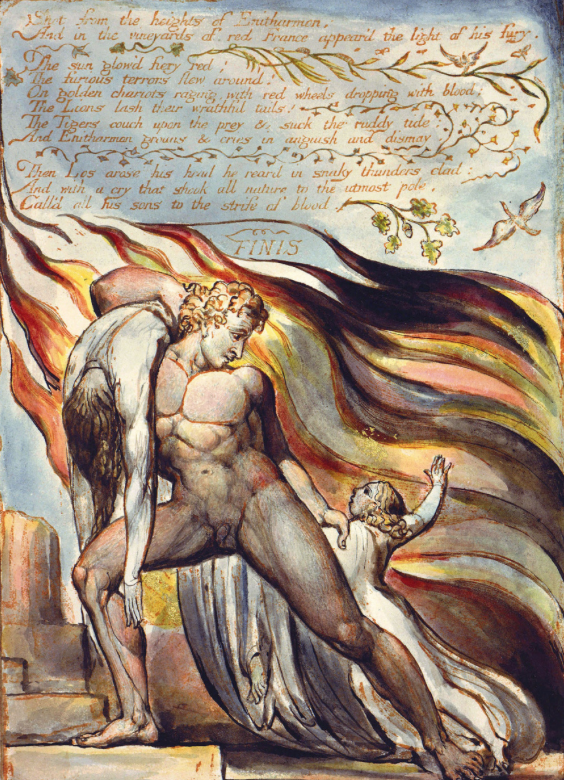