One of the most exciting, thought-provoking, inspiring, and Blakean thinkers of his generation, Douglas Rushkoff leads the way in developing a revolutionary 21st century project of recentering what it means to be human. His compelling and innovative take on everything from psychedelic drugs and the post-capitalist economy to the nature of digital technology and how to hack into our cultural programmes and start rewriting them, makes him a leading figure in understanding the dynamic intersection of technology, society and culture. He’s a media theorist – he’s the guy who coined the terms ‘viral media’, ‘digital native’ and ‘social currency’ – as well as an innovative writer, lecturer and hyper-cool graphic novelist, perhaps best known for his association with the early cyberpunk culture, and his advocacy of open source solutions to social problems.

Here’s just a glimpse of the magic.

“Team Human is most simply a sustained argument for human intervention in the Machine, that we’re living increasingly automated, directed, digital, capitalist lives – we’re living in a world that does not promote or celebrate human autonomy.”

The Best of Rushkoff

The podcast is enormously thought-provoking and compelling, and from a perspective we rarely get access to. The main discussion starts at 15mins in.

And if you’d like to check out Team Human and be part of the embodied future, click here 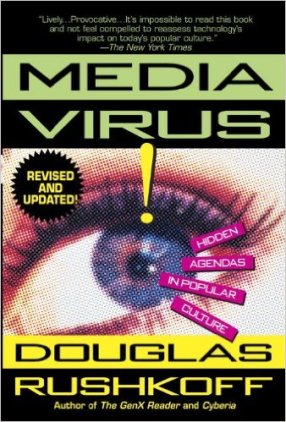 “The purpose of algorithms is to reduce human spontaneity and make you more predictable and to extract more value from you – as money, as time, and as data – and then use the data that you have about the person to market to them a future that they don’t yet know they’re going to, in order to reduce ‘anomalous’ behaviour.” – Team Human with Douglas Rushkoff | Virtual Futures Salon

“I’ve given up on fixing the economy. The economy is not broken. It’s simply unjust. There’s a difference. We have to stop looking at our economy as a broken system, but one that is working absolutely true to its original design. It’s time to be progressive — and this means initiating systemic changes. For example, Bernie Sanders’ well-meaning calls to rein in the banking industry by restoring the Federal Reserve’s function as a “regulatory agency” reveals the Left’s inability to grasp the true causes for today’s financial woes. We are not witnessing capitalism gone wrong — an otherwise egalitarian currency system has not been corrupted by greedy bankers — but, rather, capitalism doing exactly what it was programmed to do from the beginning. To fix it, we would have to dig down to its most fundamental code, and rewrite it to serve people instead of power.” – Douglas Rushkoff: Fork the Economy

On Artificial Stupidity: “If anything, our tools – from Facebook and Twitter to iPhones and our credit cards – are trying to iron out the quirky nooks and crannies that make us people. That’s what predictive algorithms are for – to advertise the future to us before we’ve even lived it, in order to make our behaviour more predictable. If there’s an 80% chance that you’re going go on a diet in 2 weeks, Facebook wants to get that chance up to 90%, or 100%, so they can go to their sponsors and say ‘We know this person’s going to go on a diet – advertise to him’. So the possibilities – the range of possibilities for human behaviour ends up being narrowed. We become more like machines, as our machines become more like people.

And really a lot of it’s a reaction against a digital culture that really hates people. Google’s main objective now is to develop Artificial Intelligence. Google’s being run by a guy, Ray Kurzweil – he’s their chief scientist – who believes that humans are fast growing obsolete – that machines are better than people, and that the minute that machines think – that we hit the Singularity – then people will only be important insofar as we can keep the computers on. And that consciousness itself should be uploaded to the chip, and then we evolve to the next level – and I think they’re leaving a whole lot out. I think they want to evolve past humanity before they even understand what it is that we’re capable of. And they got mad at me – and they said, ‘Oh Doug, you only say this because you’re a human.’ And I realised – Yeah! But it’s not hubris to say this because I’m a human – I’m on team human – I am a human, and I refuse to apologise for fighting for my species’s survival in the coming age, particularly when it’s not some other species that I like better who’s going to take over – it’s chips, that don’t think, and feel – they calculate – they’re not alive, they have no consciousness – they never have, they never will.

And if that’s a weird superstitious spiritual belief, then so be it – I’m ok being guilty of that – of thinking that humans are special.” – Team Human with Douglas Rushkoff | Virtual Futures Salon

Human beings are the Singularity: “What the show Team Human is, is really bringing together people to help people understand that being a human being is a team sport – this is not something that you do alone – that what makes human human is our social capacity. So I’m talking to different people who are doing different kinds of things, in teams, to make the world more human, and who are looking at ‘what does it mean to be human at this moment, and how do we promote the human agenda?’

“What is the reason for the wish for the eclipse of the human? Self loathing.” “Maybe it’s a loss of the sense of the sacred. Yeah – and the fact that the sacred is human.” – Douglas Rushkoff: Singularity & Self-Loathing