William Blake, Mescaline, and the end of Time

Huxley cited his fascination with Blake as a primary factor in his decision to take mescaline, which he hoped would help him transcend the self and see the world without the usual filters on reality: “the drug would admit me at least for a few hours, into the kind of inner world described by Blake.” His book of the experience, The Doors of Perception, is itself eye-opening: one of the most careful and precise deconstructions of “normal” perception ever written: “The function of the brain and nervous system is in the main eliminative”, he observed, “leaving only that very small and special selection which is likely to be practically useful”. The drug allowed him to see that what we normally call “reality” is in fact the product of a massive filtering out of reality, a systematic closing of the doors, leaving only the programs of measurement (“ratio-ing”) and utility – reality as it would necessarily appear “to an animal obsessed with survival.”

The Miracle of Naked Existence

From what I had read of the mescaline experience I was convinced in advance that the drug would admit me, at least for a few hours, into the kind of inner world described by Blake. The change which actually took place in that world was in no sense revolutionary. I saw no landscapes, no enormous spaces, no magical growth and metamorphosis of buildings, nothing remotely like a drama or a parable. The great change was in the realm of objective fact.

I took my pill at eleven. An hour and half later I was sitting in my study, looking intently at a small glass vase. At breakfast that morning I had been struck by the lively dissonance of its colours. But that was no longer the point. I was not looking now at an unusual flower arrangement. I was seeing what Adam had seen on the morning of his creation – the miracle, moment by moment, of naked existence.

‘Is it agreeable?’ someone asked. ‘Neither agreeable nor disagreeable,’ I answered. ‘It just is.’

Istigkeit – wasn’t that the word Meister Eckhart liked to use? ‘Is-ness.’ The Being of Platonic philosophy – except that Plato seems to have made the enormous, the grotesque mistake of separating Being from becoming, and identifying it with the mathematical abstraction of the Idea. He could never, poor fellow, have seen a bunch of flowers shining with their own inner light and all but quivering under the pressure of the significance with which they were charged; could never have perceived that what rose and iris and carnation so intensely signified was nothing more, and nothing less, than what they were – a transience that was yet eternal life, a perpetual perishing that was at the same time pure Being, a bundle of minute, unique particulars in which, by some unspeakable and yet self-evident paradox, was to be seen the divine source of all existence.

I continued to look at the flowers, and in their living light I seemed to detect the qualitative equivalent of breathing – but of a breathing without returns to a starting-point, with no recurrent ebbs but only a repeated flow from beauty to heightened beauty, from deeper to even deeper meaning.

‘What about spatial relationships?’ the investigator enquired, as I was looking at the books, with which my study were lined.

It was difficult to answer. True, the perspective look rather odd, and the walls of the room no longer seemed to meet in right angles. But these were not the really important facts. The really important facts were that spatial relationships had ceased to matter very much and that my mind was perceiving the world in terms of other than spatial categories.

At ordinary times the eye concerns itself with such problems as Where? – How far?  – How situated in relation to what? In the mescaline experience the implied questions to which the eye responds are of another order. Place and distance cease to be of much interest. The mind does its perceiving in terms of intensity of experience, profundity of significance, relationships with pattern. I saw the books, but was not at all concerned with their positions in space. What I noticed was the fact that all of them glowed with living light and that in some the glory was more manifest than others. Space was still there; but it had lost its predominance. The mind was primarily concerned, not with measures and locations, but with being and meaning. 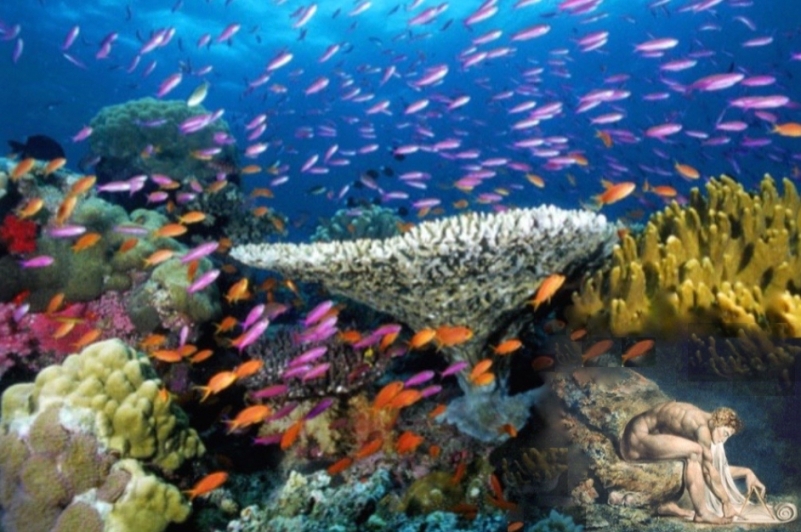 “In ignorance to view a small portion & think that All, And call it Demonstration”: rationality is like a cognitive app that filters out most of reality 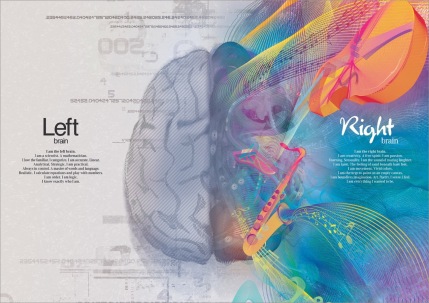 “By organizing details in a linear and methodical configuration, our left brain manifests the concept of time whereby our moments are divided into past, present, and future.” (Jill Bolte Taylor)

‘There seems to be plenty of it,’ was all I would answer when the investigator asked me to say what I felt about time.

Plenty of it, but exactly how much was entirely irrelevant. I could, of course, have looked at my watch; but my watch, I knew, was in another universe. My actual experience had been, was still, of an indefinite duration or alternatively of a perpetual present made up of one continually changing apocalypse.

My Watch Was In Another Universe

“There seems to be plenty of it”

From the books the investigator directed my attention to the furniture. I was back where I had been when I was looking at the flowers – back in a world where everything shone with the Inner Light, and was infinite in its significance. The legs, for example of that chair – how miraculous their tubularity, how supernatural their polished smoothness!

I spent several minutes – or was it several centuries? – not merely gazing at those bamboo legs, but actually being them – or rather being myself in them; or, to be still more accurate (for ‘I’ was not involved in the case, nor in a certain sense were ‘they’) being my Not-self in the Not-self which was the chair.

Reflecting on my experience, I find myself agreeing with the eminent Cambridge philosopher, Dr C.D. Broad, “that the function of the brain and nervous system and sense organs is in the main eliminative and not productive.” Each person is at each moment capable of remembering all that has ever happened to him and of perceiving everything that is happening everywhere in the universe.

The function of the brain and nervous system is to protect us from being overwhelmed and confused by this mass of largely useless and irrelevant knowledge, by shutting out most of what we should otherwise perceive or remember at any moment, and leaving only that very small and special selection which is likely it be practically useful. 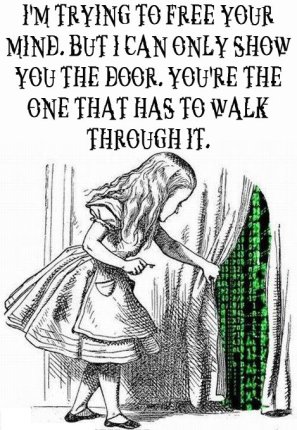 According to such a theory, each one of us is potentially Mind at Large. But in so far as we are animals, our business is at all costs to survive. To make biological survival possible, Mind at Large has to be funnelled through the reducing valve of the brain and nervous system. What comes out at the other end is a measly trickle of the kind of consciousness which will help us to stay alive on the surface of this particular planet.

To formulate and express the consciousness of this reduced awareness, man has invented and endlessly elaborated those symbol-systems and implicit philosophies which we call languages. Every individual is at once the beneficiary and the victim of the linguistic tradition into which he or she has been born – the beneficiary inasmuch as language gives access to the accumulated records of other people’s experience, the victim in so far as it confirms him in the belief that reduced awareness is the only awareness and as it bedevils his sense of reality so that he is all too apt to take his concepts for data, his words for actual things.

Nature: The Universe of Reduced Awareness

Perceptual Selection: How Reality Looks to an Animal Obsessed with Survival

That which, in the language of religion, is called ‘this world’ is the universe of reduced awareness, expressed and, as it were, petrified in language. The various ‘other worlds’, with which human beings erratically make contact are so many elements in the totality of the awareness belonging to Mind at Large.

Most people, most of the time, know only what comes through the reducing valve and is consecrated as genuinely real by the local language.

Certain persons, however, seem to be born with a kind of by-pass that circumvents the reducing valve. In others temporary by-passes may be acquired either spontaneously, or as the result of deliberate ‘spiritual exercises’, or through hypnosis, or by means of drugs. Through these permanent or temporary by-passes there flows, not indeed the perception of ‘everything that is happening everywhere in the universe’’ (for the by-pass does not abolish the reducing valve, which still excludes the total content of Mind at Large), but something more than, and above all something different from, the carefully selected utilitarian material which our narrowed, individual minds regard as a complete, or at least sufficient, picture of reality.

“An animal obsessed with survival”: Blake’s figure of Nebuchadnezzar suggests that in a psychological or mentally-dependent universe we construct “reality” according to our dominant unconscious programmes: the internal “Nature” programme therefore sees reality as “A Creation that groans, living on Death”

To be shaken out of the ruts of ordinary perception, to be shown for a few timeless hours the outer and the inner world, not as they appear to an animal obsessed with survival or to a human being obsessed with words and notions, but as they are apprehended, directly and unconditionally, by Mind at Large – this is an experience of inestimable value to everyone.

Aldous Huxley was an English writer, novelist, and philosopher, best known for his novels such as Brave New World, and his for non-fiction books such as The Doors of Perception and Heaven and Hell. He was a humanist and pacifist (his application for American citizenship application was continuously deferred on the grounds that he would not say he would take up arms to defend the U.S), and he later became interested in spiritual subjects such as parapsychology and universalism. By the end of his life, Huxley was widely acknowledged as one of the pre-eminent intellectuals of his time, nominated for the Nobel Prize in Literature in seven different years.

It’s All In the Brain

1. Have a look at this swirling pattern for 30 seconds and then look at the still from the movie “Inception” below. 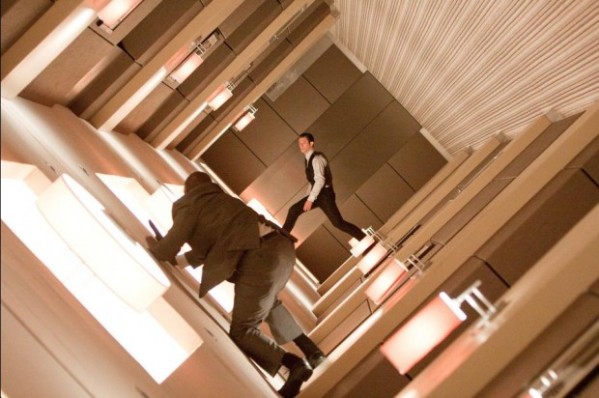 2. These cigarettes are actually the same size.

3. All the dots on this image are white, but some appear black. No one knows why this is. 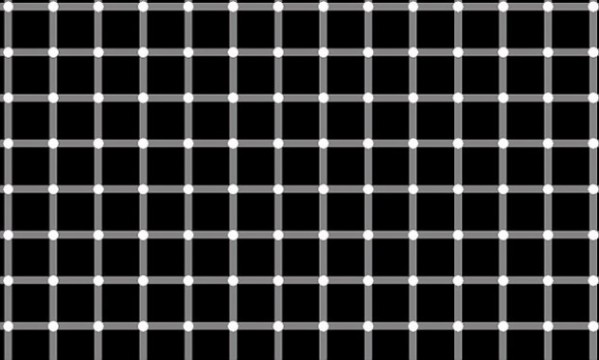 4. These squares are actually the same exact color. Hold your finger horizontally over the boundary between the two shapes and the colors will be corrected.

5. Stare at the green dot too long and the yellow spots will disappear. Blink and they’ll return.

6. This image has a similar effect, stare at the cross in the center and the blank spot will turn green.

7. Which way is this train moving? Look long enough or blink and your brain will change the direction.

8. These three cars may look like they’re different sizes, but in reality, they’re all exactly the same. 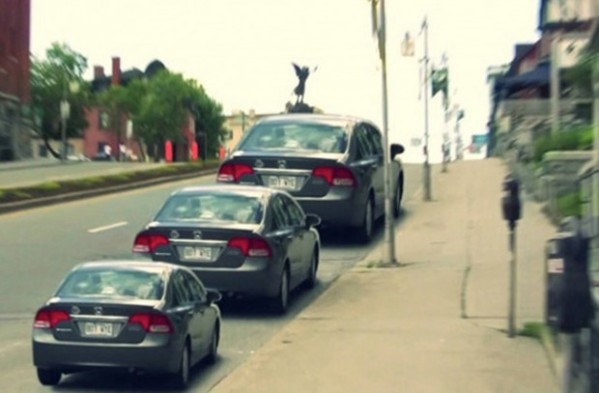 9. The squares marked ‘A’ and ‘B’ below are actually the exact same shade of grey. 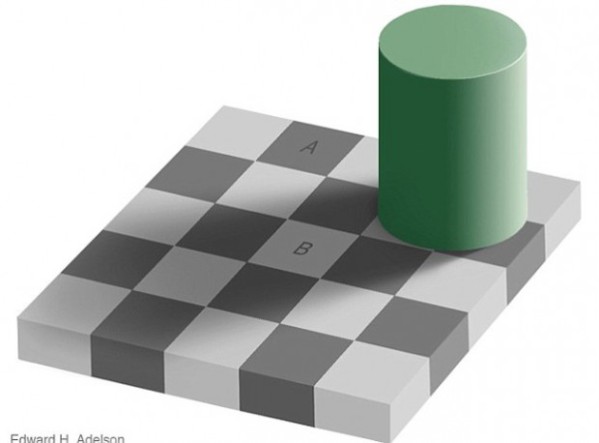 10. Akiyoshi Kitaoka uses geometrical shapes, brightness and colour to create motion illusions. These images are not animated, but the human brain makes them appear so.

14. Using clever design, artists like Ibride are able to create art that look different or even impossible depending on the angle.

“It made me realise that actually reality was a state of mind and that, as your mind could change, so could your reality” (Alan Moore on taking acid)