The Sleep of Six Thousand Years: The Fall of Man and the Rise of Agriculture, Cities, and Civilisation 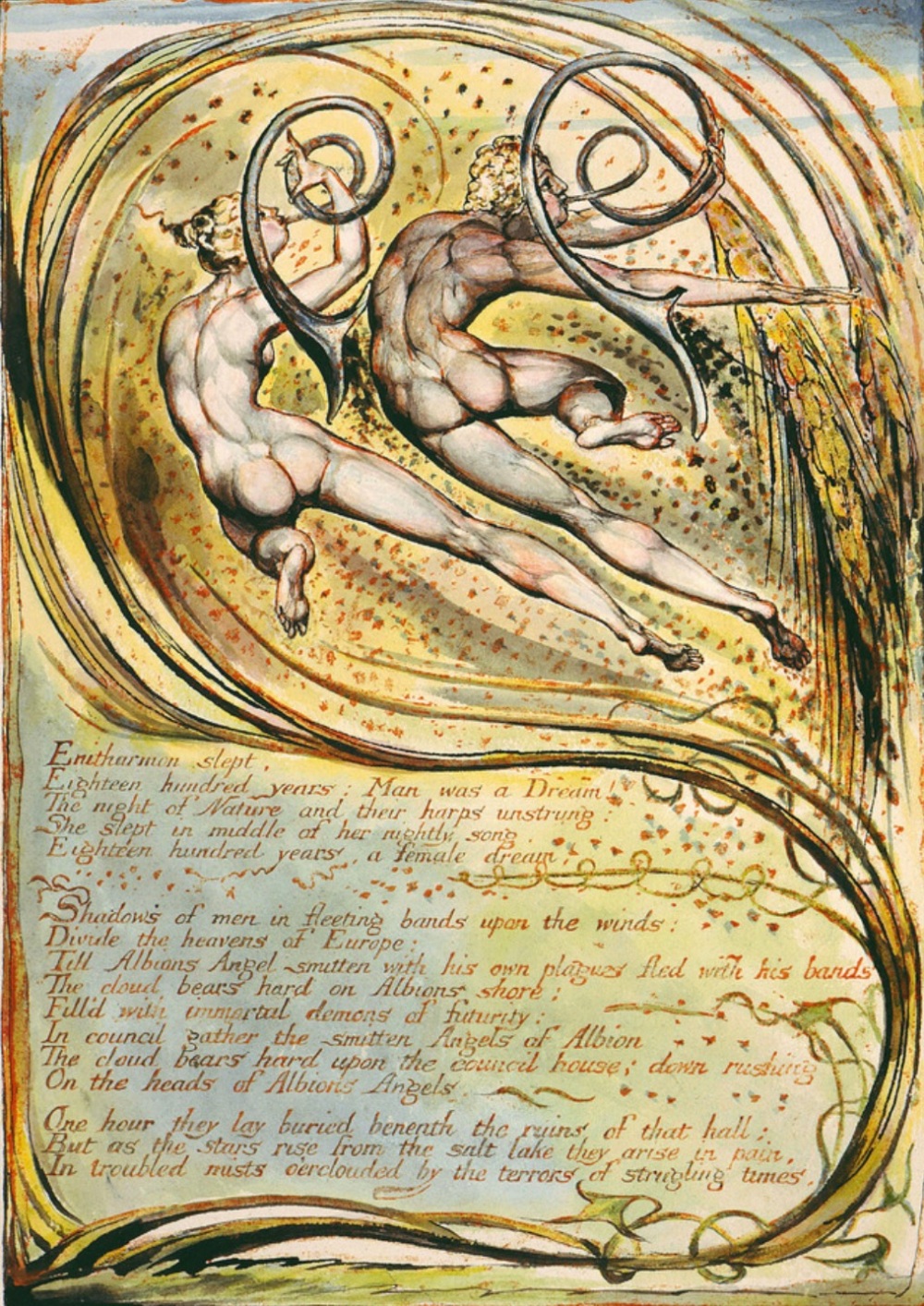 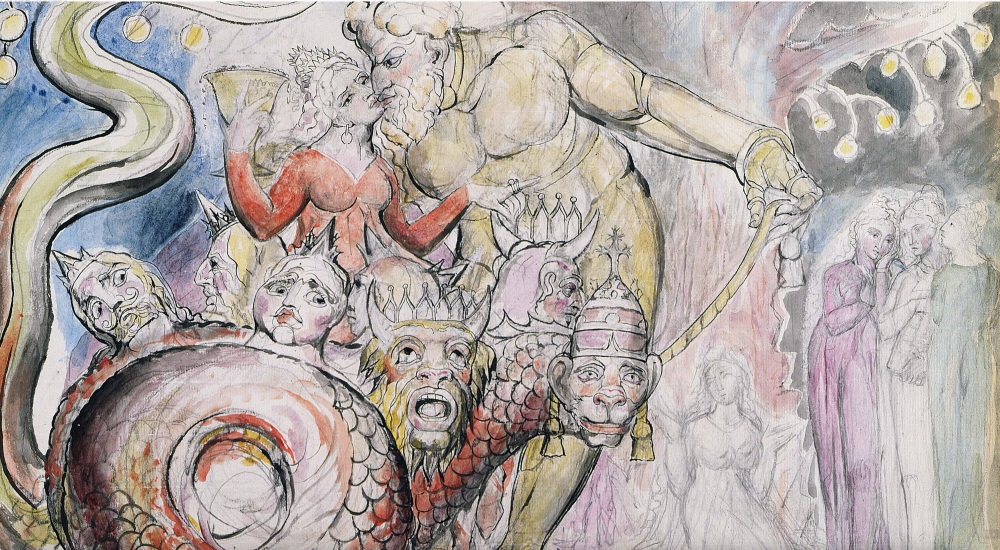 Give Us Today Our Daily … “A state can be defined as a territory over which an elite exercised coercive power maintaining itself by taxing the population either through its produce or its labour. Scott provides a fascinating insight into just how they worked. He argues that for a state to exist it needed to be reliant on a staple that could easily be taxed – and grain was the ideal. Another advantage of grain to the state was that it had a higher value per unit volume than most other foodstuffs and was easy to store in the protection of the city, from where it could be doled out to slaves and soldiers or used to feed the population when under siege. Through taxation the state became the quartermaster and producers became subjects” (Guardian review of Scott’s book, by Barry Cunliffe).

Recent anthropological research suggests that a significant and dramatic shift occurred in human cultures around six thousand years ago, resulting in the relatively sudden and massive advances in technological and linguistic innovations which were such a prominent characteristic of the extraordinary new civilisations of Sumer and Babylon, as well as in equally sudden and massive advances in social inequality, war, hierarchy, and accountancy.

The emergence of these developments around six thousand years ago is of particular relevance in a discussion of Blake as he repeatedly alludes to the cultures of Babylon, Tyre, and Egypt (Mesopotamia) as being of significance in the “fall into Division” that he recounts in his long prophetic poems (“the Works/Of Egypt and Babylon Whose Gods are the Powers of this World”; Laocoon). This psychological or dissociative “fall”, he remarks, originates in or is coeval with these centres, considered both as historical locations and metaphorical states, and even more interestingly in this context, Blake notes that this fall has lasted for a period of “Six Thousand Years”, a phrase that recurs in his longer poems almost like a heart-beat.

Blake suggests that these giant sleeping energies within man are beginning to awaken, and with them the awareness of history and of man’s real state. “Six Thousand years are passd away the end approaches fast”, sings Los (Mil 23:55), and with it the end of the unconscious Urizenic processes currently nailing down man’s intuitive awareness.

END_OF_DOCUMENT_TOKEN_TO_BE_REPLACED

Howl: The War of this World against Vision and Imagination 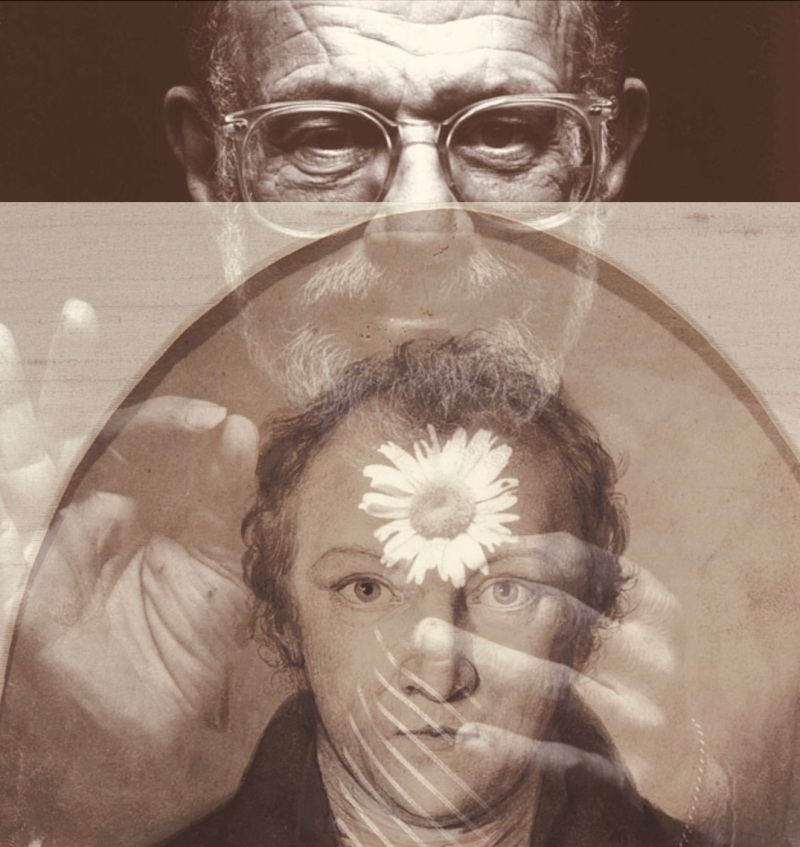 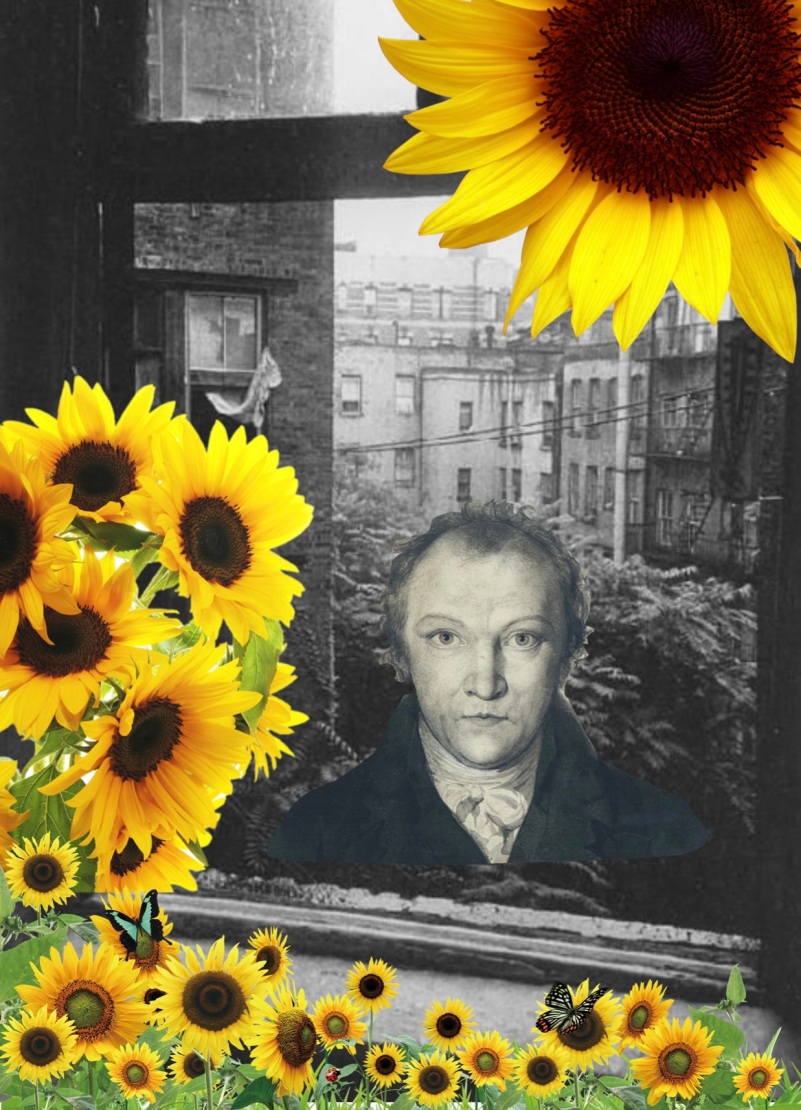 Allen Ginsberg (1926–1997) in front of the opening lines of Howl, referencing Blake in its opening section

William Blake’s influence on the Beat Generation is arguably more significant than that of any other writer or artist. Most notably he was Ginsberg’s “guru” and the “catalyst” for his poetry, and even warranted a mention in “Howl”. Blake supposedly appeared to Ginsberg in 1945 and read “Ah Sun-flower”, and again in 1948 when Ginsberg was reading “The Sick Rose”. He explained,

I was never able to figure out whether I was having a religious vision, a hallucinatory experience, or what, but it was the deepest ‘spiritual’ experience I had in my life, and determined my karma as poet. That’s the-key pivotal turnabout of my own existence. That’s why I was hung up on setting Blake to music.

Visions were important to Blake, who claimed that his poetry was not necessarily a work that he created, but something channeled through him. He referred to himself as a “true Orator” and claimed that poetry came from a voice that he simply wrote down.

END_OF_DOCUMENT_TOKEN_TO_BE_REPLACED

The Thinker and the Thought: “What you are, the world is. So your problem is the world’s problem” 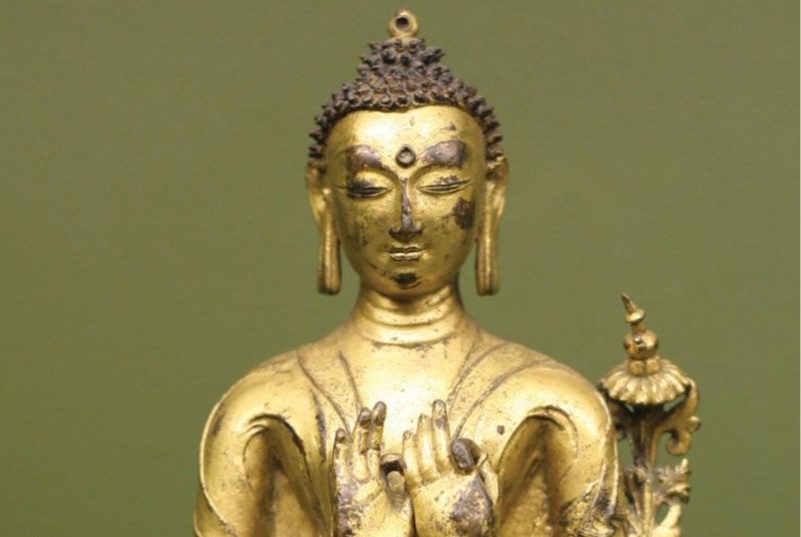 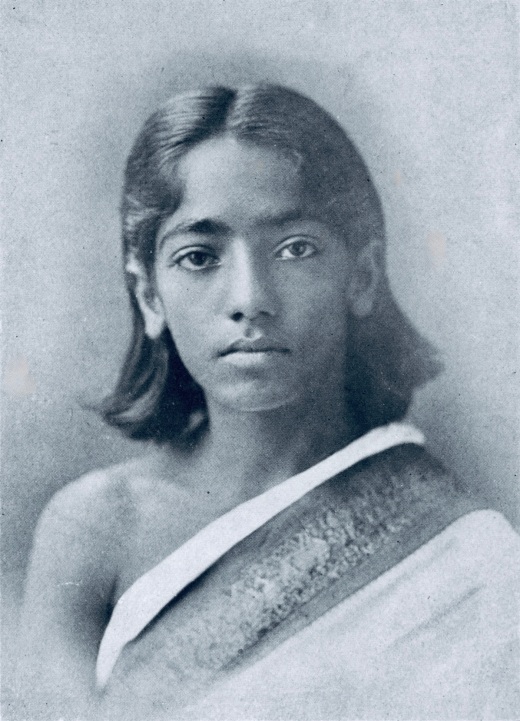 Krishnamurti in 1910. The year before, theosophist Charles Webster Leadbeater, who claimed clairvoyance, had noticed Krishnamurti on the Society’s beach on the Adyar river and was amazed by the “most wonderful aura he had ever seen, without a particle of selfishness in it.” Leadbeater was convinced that the boy would become a spiritual teacher and a great orator; the likely “vehicle for the Lord Maitreya” in theosophical doctrine, an advanced spiritual entity periodically appearing on Earth as a World Teacher to guide the evolution of humankind. Krishnamurti later rejected this role, and indeed rejected the whole idea of following “roles”, after an intense spiritual experience in 1922.

Jiddu Krishnamurti was an Indian philosopher, speaker, and writer. In his early life, he was groomed to be the new ‘World Teacher’ (the Theosophical concept of Maitreya), but he later rejected this mantle and withdrew from the Theosophy organization behind it.

His interests included psychological revolution, the nature of mind, meditation, holistic inquiry, human relationships, and bringing about radical change in society. He stressed the need for a revolution in the psyche of every human being and emphasised that such revolution cannot be brought about by any external authority, be it religious, political, or social.

Krishnamurti was often seen as a spiritual master, although he interestingly mistrusted all religions and denounced the Eastern convention of deifying living spiritual masters. This gives some of his thinking an unusual and indeed at times devastating honesty. Perhaps nowhere is this more seen than in his critiques of the ego – the basis of both the modern personality and of most orthodox psychoanalytic thinking (the purpose of much Freudian and Jungian analysis is actually to strengthen the ego). The goal in Krishnamurti’s vision seems to be to go beyond both ‘self’ and beyond ‘mind’ (which, like Tolle, Krishnamurti equates with ego or what Blake calls “Selfhood”). “Judgement and comparison commit us irrevocably to duality”, he says – and we can never be happy therefore while we are in this state. And neither can those around us.

END_OF_DOCUMENT_TOKEN_TO_BE_REPLACED

War in the Mind: Psychoanalysing the origins of war 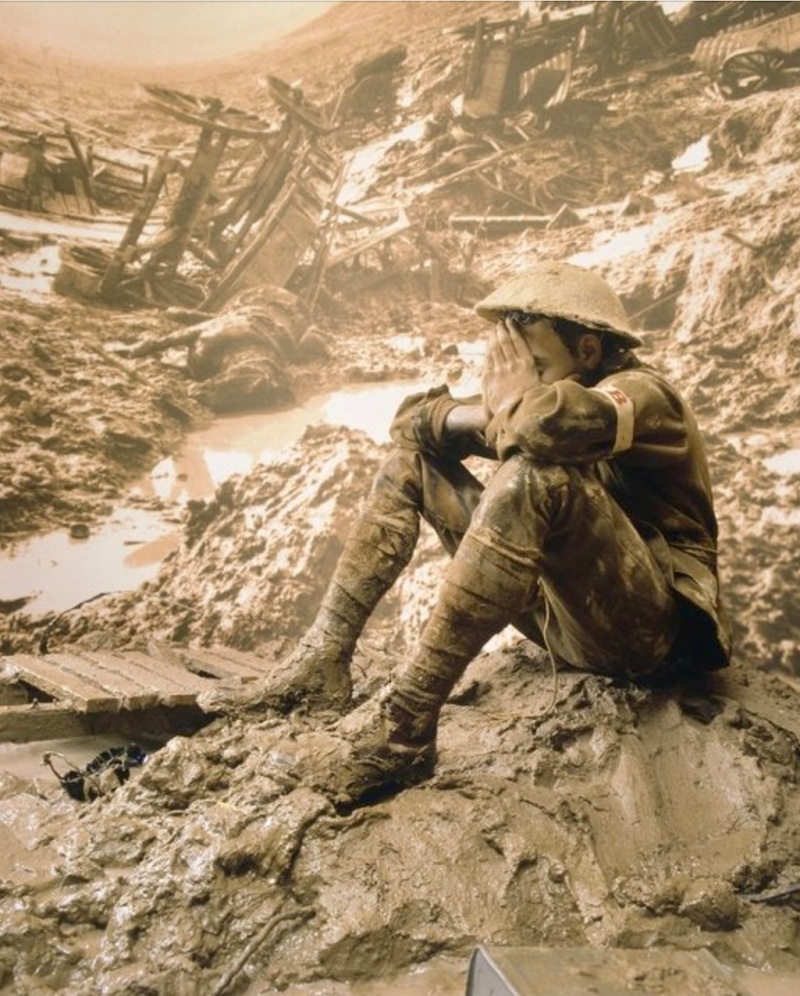 Introduction: Freud and Einstein on War

In 1931, the Institute for Intellectual Cooperation invited Albert Einstein to a cross-disciplinary exchange of ideas about politics and peace with a thinker of his choosing. He selected Sigmund Freud, whom he had met briefly in 1927 and whose work, despite being skeptical of psychoanalysis, the legendary physicist had come to admire. A series of letters followed, discussing the abstract generalities of human nature and the potential concrete steps for reducing violence in the world.

In a twist of irony, the correspondence was only published in 1933 — after Hitler, who would eventually banish both Einstein and Freud into exile, rose to power — in a slim limited-edition pamphlet titled Why War?. Only 2,000 copies of the English translation were printed, most of which were lost during the war. But the gist of the correspondence, which remains surprisingly little-known, is preserved in the 1960 volume Einstein on Peace, featuring a foreword by none other than Bertand Russell.

The initial letter came from Einstein, who posed the question, ‘Is there any way of delivering mankind from the menace of war?’  Freud sets out his response, exploring various aspects of human nature which illustrate how war appears virtually inevitable.

END_OF_DOCUMENT_TOKEN_TO_BE_REPLACED

Fiat Lux: The Perception of Spacetime and the Fallen Imagination 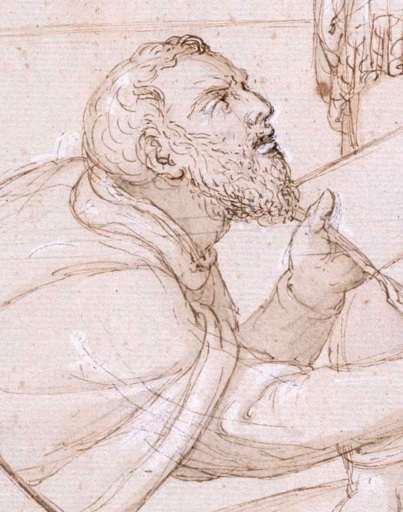 As many critics have pointed out, the remarkable work of the Portuguese Renaissance artist Francisco de Holanda “seems to predict another singular genius: William Blake, whom it predates by two centuries” (Michael Benson, Cosmigraphics: Picturing Space Through Time). Equally remarkable is the fact that many of Holanda’s most astonishing paintings were only discovered a few decades ago. As Benson notes in his compelling examination of visual depictions of the creation of the universe and of Holanda’s work in particular (a rarity in itself in Western academic studies, as there is still almost nothing written about this pioneering figure):

Perhaps the most extraordinary set of pictures depicting space-time’s origins dates from 1573. Discovered in the mid-20th century in an obscure notebook in the National Library of Spain, it was painted by the Portuguese artist and philosopher Francisco de Holanda, a student and lifelong friend of Michelangelo.

END_OF_DOCUMENT_TOKEN_TO_BE_REPLACED

Heaven and Hell: The Human Imagination and the Transformation of Reality

END_OF_DOCUMENT_TOKEN_TO_BE_REPLACED

Tyger, Tyger: The Predators, the Single Eye, and the Pyramids within our Heads 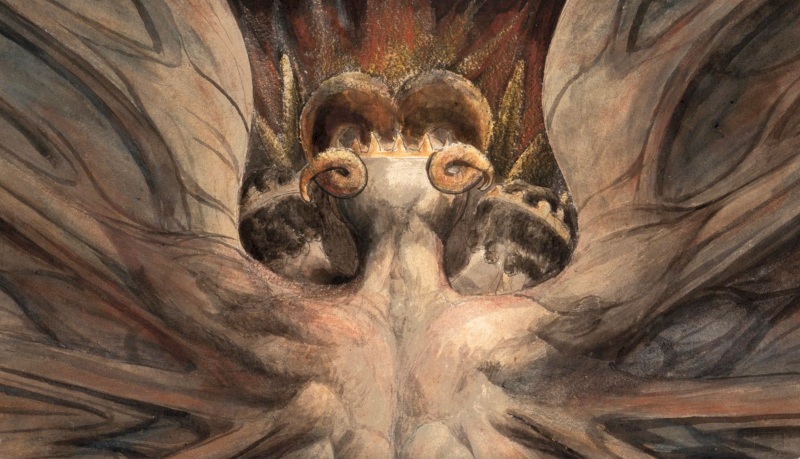 In 2014, the psychiatrist and philosopher Iain McGilchrist gave a remarkable talk on the art and symbolism of patients with schizophrenia or psychosis (‘Neuromania – Spiders, yes, but why cats?‘). The presentation was not only a fascinating insight into the nature of these conditions, and the implicit and intrinsic connections between symptoms and symbols, but also a profound exploration of the peculiar symbolism and imagery that more generally surrounds us in our supposedly hyper-rational cultures, and which artist and writer William Blake somehow understood and drew upon.

END_OF_DOCUMENT_TOKEN_TO_BE_REPLACED

Totalitarianism and the Urizenic Mind 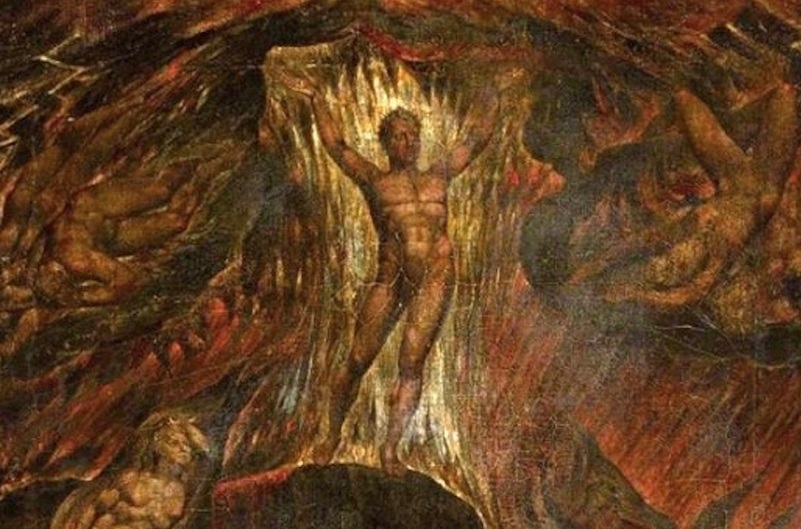 Milton wrote Paradise Lost just before the rise of the nation states, and Milton also had the intuition that there was something wrong with rationality, and he identified rationality with the mythology of Satan.

In the mythology of Satan, Satan was represented as the highest angel in God’s heavenly kingdom – so you can think about that as the highest psychological function, who had rebelled against God and then was cast into Hell.

His hypothesis was this: Evil was the force that believes that its knowledge of the world is complete. And that it can do without the transcendent. And as soon as it makes that claim, it instantly exists in a place that’s indistinguishable from hell.  [“In Hell all is Self Righteousness” – Blake. As McGilchrist notes in his fascinating gloss on Blake, “He who sees the Infinite (looks outward to the ever-becoming with the right hemisphere) in all things sees God. He who sees the Ratio only [looks at the self-defined world brought into being by the left hemisphere] sees himself only (the left hemisphere is self-reflexive)”]. And it could get out merely by admitting its Error, and it will never do that.

END_OF_DOCUMENT_TOKEN_TO_BE_REPLACED

Charles Dickens and the Manufacture of Christmas

Introduction: Unpacking the Myth of Christmas

When we think of Christmas, we often think of the glowing celebrations and colourful conjuring-up of deep midwinter festivals and festivities, of the re-telling of a story that has gone back 2,000 years to the birth of a child in a manger, under a burning star, or even further back into time – to the glimmerings and Götterdämmerungs of much older, more ancestral pagan celebrations and rituals of solstice suns and the promise of the rebirth of the year, that make us feel somehow that we’re participating in some deep magic, some atavistic world of connection and history, as we cosy ourselves back in our sofas, turn on the TV, and pour another glass of mulled wine.

END_OF_DOCUMENT_TOKEN_TO_BE_REPLACED 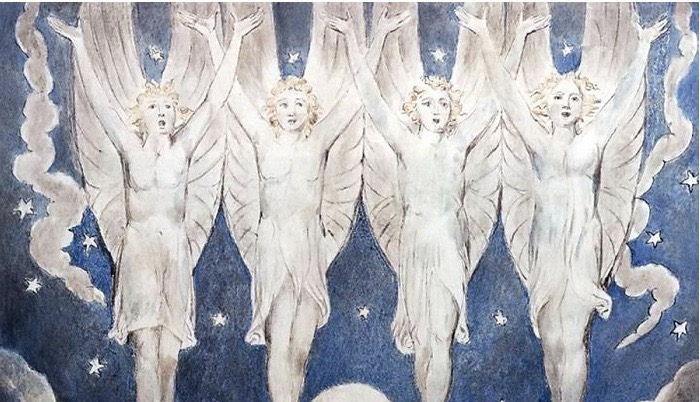 Just as Blake believed that angels are inter-relational and can interpenetrate many dimensions, a part of the divine fabric that constitutes human imagination and an extended field of gravity-like attraction and connection (“betweenness”), this piece weaves together the thought of three different but interrelated Blake commentators on angels – Mia Forbes, S. Foster Damon, and Northrop Frye – thus hoping to build, in a sense, the wings of mutual communion and flight, ones which constitute the true or ‘best’ sense of the angelic in Blake: wings enfolded within wings.

“Angel” is the Greek word for “messenger” or “emissary”.  Blake used the word in the specific sense only once, in expanding Matthew 1:20, where the Angel of the Lord appears to Joseph in a dream, bidding him marry Mary. In the Bible it is not always easy to be sure whether God himself may not be intended by the word. Blake combined the two: “I heard his voice in my sleep & his Angel in my dream” (Jerusalem). But anything that speaks of Eternity may be an angel; thus the tiny skylark is “a Mighty Angel” (Milton: 12; cf.L’Allegro).

“Every man’s leading propensity ought to be call’d his leading Virtue & his good Angel” (Blake, On Lavater). Blake had one (see ‘A Dream’, Songs of Innocence; or “The Angel that presided o’er my birth”, from Blake’s Notebook 1808-26); Milton had one (Milton); also the unfortunate heroine of ‘The Angel’ (Songs of Experience). Angels guard children and give them sleep (‘Night’, and ‘A Cradle Song’, Songs of Innocence).